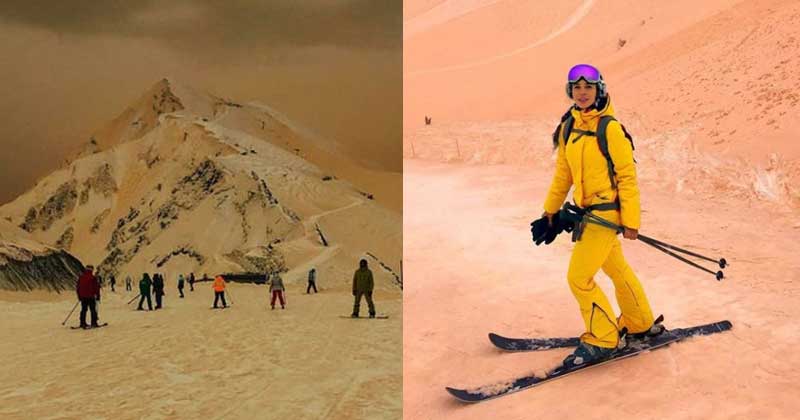 Elon Musk is trying hard to make humans a multi-planetary species. Through his SpaceX programme Musk is planning to send humans to Mars as a “backup drive” for civilization. However, there’s a long time for it to really happen. Till then, people can totally experience the Mars atmosphere (atleast in colour) in Eastern Europe.

The dust from a sandstorm in the Sahara Desert is causing the snow in eastern Europe to turn orange, transforming the mountainous regions of Ukraine, Russia, Bulgaria, and Romania into Mars-like landscapes.

This phenomenal view is said to be created by a mix of sand, dust and pollen particles that stirred up and swept across from storms in northern Africa, as reported by The Guardian.

Sahara or Siberia? Orange snow has been reported in eastern Europe and Russia. Saharan storms brought sand and dust across the Mediterranean, which mixed with the snow. This also turned skies an eerie shade of red across Cyprus pic.twitter.com/9LRrQCyC4S

Orange snow is falling in Eastern Europe. Sand from desert storms in the Sahara is mixing with snow and rain and falling in countries including Russia, Bulgaria, and Ukraine https://t.co/XX983YZUBN pic.twitter.com/RWCSDgfic5

According to meteorologists, the phenomenon occurs roughly every five years. Steven Keates, a weather forecaster at the UK’s Met Office, told the Independent: “As the sand gets lifted to the upper levels of the atmosphere, it gets distributed elsewhere. “Looking at satellite imagery from NASA, it shows a lot of sand and dust in the atmosphere drifting across the Mediterranean.”

A similar phenomenon to this occurred back in 2007 when mysterious “oily” orange snow fell across three regions of southern Siberia. Nature indeed has some unique and bizarre gifts for its people.