To a country no stranger to a crop of problems in the more recent times, such as facing an acute shortage of black skilled laborers, having already embraced the worst kinds of the water crisis, it appears that the list of woes for South Africa isn’t ending anytime soon!

And where the latest developments stand then it appears that there’s a new problem staring one of Africa’s most prosperous and widely respected nations.

It appears that the drought in South Africa is the latest crisis facing the Cyril Ramaphosa-led country. Yes, you read that right. At present, South Africa is facing, what a vast majority of farmers are calling the driest ever period in recent decades.

It appears that the situation in the ‘Rainbow Nation’ is so adverse at the moment that the farmers have had to sell their livestock, which in turn, is having a knock-on effect on the South African economy.

So obviously in the presence of the drought in South Africa, there appears to be a severe shortage of water. This indeed has led to a precarious situation in both the urbanized zones as well as the hinterland.

Well, it’s no rocket science. There’s a genuine lack of water which ultimately means that whatever water resources are at the disposal of the commoner, have to be carefully utilized.

Wastage or careless usage of the critical source (a life-sustaining one, let’s not forget) is simply out of question. But one wonders, in such a grave situation what has the government done in terms of any immediate plan of action?

In response to an acute lack of water, the administration is hardpressed to find ample and sustainable solutions. But for starters, common sense has prevailed.

The South African government has imposed emergency measures that restrict the rampant usage of water and steps have been carried out to improve supply infrastructure.

Still, the worst bit of crisis, it ought to be said, is being faced by the farmer, one who often doesn’t earn as well as he would like. The farmers, irate by the driest season that South Africa has ever had to endure in the last few decades submit a hard reality.

They share that the dry conditions and the genuine paucity of water has left their work on a bleak path. Some farmers, who are worst affected on account of the drought in South Africa are having to spend as much as 1,000 dollars a week in order to feed their cattle (or livestock).

This is because the cattle quite simply have no way else to graze on the parched lands. And if one were to truly highlight the woes of the farmers then what cannot be ignored is that in real, there’s been very little rain in the country since 2017.

In 2019, there’s hardly been any rainfall in South Africa, thus putting the agrarian output on the backburner. With hardly any savings on them and have found no alternative other than selling their livestock(because they are a drain on the farmers’ finances), the biggest jolt is being faced by the farmer.

The burning question, however, is what will become of the country if a similar fate ensues in the times to come? How will the government cope with the natural calamity other than declaring it a ‘national disaster?’ 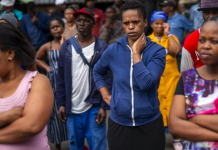