Why Germany’s Erwin Rommel Will Not Be Forgotten?

The Nazis; the face of brutality, the symbol of pure, terrifying evil- haven’t been forgotten. Can’t be. There are more symbols in the ebb of Nazism that remind of atrocities than there are famished souls in the developing world. These symbols evoke horror; spine-chilling horror despite the furore of the Second World War tucked well into the past; somewhere in hardbound and paperback accounts that carry cursory dark spots, perhaps ironically signifying the darkness that had enveloped a highly tumultuous, blooded period in mankind’s history.

Cold-blooded assassinations. Systematic eliminations. No sign of mercy; not even a minute twinge of regret. They didn’t only claim the Jews. The gypsies weren’t spared either. The nomads and homosexuals were slaughtered, rendered listless, dubbed no good’. No matter what literature you choose to pick and dive into- whether a bestselling non fiction account by the highly regarded Richard Overy, or a page-turning account of Second World War by Guy Walters- a historian responsible for separating facts from junk history- the heart shall swell with deep regret to undergo a heartless account of the many tragedies inflicted on millions of hapless lives. 6 million deaths documented. The others- perhaps in excess of a million- swept away by carnage.

It is hard to think of any other term abiding Germany than those of the horrors it was responsible for. The Extermination camps. Can the mind ever overcome what transpired in them?

Treblinka. Dachau. Bergen Belsen. Sobibor. Undoubtedly, the most wretched hell hole on earth: The Auschwitz. Then there’s a coterie of cold, bloodless conniving wretched men responsible for the horrors: Eichmann. Bormann. Heidrich. Himmler. Dr. Mengele, even corrupt, their SS and their Gestapo. Even Manstein and Ribbentrop. American slang has an apt term- scum of the earth.

The Nazis shall haunt public memory, till the time the world, that often conveniently bypasses the the morose remembered by history and substantiates baseless defences to acts of barbarity- chooses not to overlook them.

It’s been 70 years. We no longer are in 1945.  7 decades have passed since the Second World War wrecked peace and produced about a period marred by savagery on earth; in  arguably the most admired continent.

But a question lingers on. What became of chivalry?

What happened to Germany’s conscience? The modern world offers myriad instances to understand just what is meant by chivalry. You open the door for a lady carrying many shopping bags- that’s not a bad example of being chivalrous. You offer to the pay the bill in an elite fine-dining eatery for a friend who’s struggling to make ends meet. That’s chivalrous. You offer a lift in the air-conditioned confines of your vehicle seeing a soldier carry heavy backpacks in scorching sun. That’s great.

Read Also: “Chivalry Isn’t Dead,”: A Tribute in The Form of a Poem on Erwin Rommel, The Great Desert Fox

But back in the morose of the Second World War, regardless of where exterminations and brute warfare made news- a man stood between the combined might of the allied powers (USA, USSR, Great Britain) and Hitler, an incarnation of evil.

Rommel was a soldier- first and always. Politics, as he famously remarked, was none of his business.

Not since Rommel or in the period before him has any German general been as deeply-appreciated and debated for exhibiting both- a commitment to the Third Reich and for exhibiting outstanding leadership in the theatres of war.

Who was Rommel and why does the Rommel myth endure, well after seven decades of his death?

Let’s put the record straight on this one. As per finely captured details in epic Rommel literature, modern military blogs, historical assessments and History, National Geographic biographical pieces- Erwin Rommel was a tireless soldier- devoted to the cause of fighting for Germany. What Nazism stood for was of little value to him.

The Germany of the 20th century was still seething in great pain after winning the Franco-Prussian war of the 1870s. A powerful army fed by conscription was made up largely of Prussian nobility. However, there was still a great need for officers to join in from the middle classes.

Rommel- then, a young agile German was gearing up for action. An outstanding athlete who dreaded sitting idle, Rommel was sharp in Math, driven to gymnastics and had the incisiveness and mentation to create a mini-glider plane out of scratch. Having no vices in life, a mild-mannered Rommel was pushed by his father to join the 124th Baden-Wurttemberg Infantry Regiment. It was July, 1910.

Soon, upon serving a mandatory stint as a cadet, by 1912, finding no openings in Artillery, a preferred fraction, Rommel wasted no time in joining the infantry.

As 1914 approached, an year when Germany and much of Europe was plunged into war, Rommel found his true reputation as a persevering soldier on the bloddied3 battlefields of Europe. Without any further thoughts would Rommel take absolute command of not one but two platoons as soldiers- aching, tired, struggled to keep up with Lieutenant Rommel.

The legend of the unkill-able fox was to be born

So implicit was warfare to his life and daring to his persona that a famous quote by an unnamed soldier heaped dollops of respect, “ Rommel’s spirit permeates into the entire contingent”.

Historians lavish effusive praise, “anybody who came in contact in Rommel was struck by his magnificent charm and personality”.

He was tireless, unflustered and had what the German’s called “fingerspitzengefuhl”: a sixth sense to fathom where the enemy hid; what their next move would be. A moment of great eminence arrived during the Operation Caporetto where Germans battled at the Austro-Italian front of Mount Matajur. Rommel, who was now leading several Italian troops to attack braved a barrage of assaults by hand-grenades, mountain-guns and flame-throwers.

He threw himself at the French with bare hands after a gun had run out of bullets. Despite being shot in the thigh,  Rommel persisted. Undeterred. For demonstrating a true soldiers’ ethos: ‘never say die’- he was awarded the Iron Cross.

It was in WW1 during moments of intense battling in the trenches that Erwin Rommel mastered the art of ‘trench-warfare’. He found time to pen a military compendium on strategies, operations and, techniques to hound one’s nemesis during infantry wars which would later sell like hot cakes: Infantry Attacks would be a big hit.

Hilter would read it when he rose to power. He would be moved by the immensity of Rommel’s imagination; a man whose military genius instantly impressed him.

But what would you call Bernard Montgomery, General Patton and above all, Sir Winston Churchill?

In the Second World War, pushing Hitler to give him charge of a Panzer division, Rommel commanded with great might and vigil the famous Africa Korps, the German expeditionary force that fought tectonic battles in the sandy heat and desert storms of North Africa from March 1941 until its surrender in 1943.

Rommel took to the desert akin to a fish to the ocean. The heat failed to burn him down; th overwhelming size of first Claude Auchenleck and later, Montogomery’s ammunition didn’t bother him.

Whether it were the gutsy battles at Tobruk or the endearing fighting at El Alamein, the latter that ultimately pushed Rommel’s famous ‘Ghost division’ to retreat from the desert, the German’s brilliant tactical leadership and daring magnified his status as an immortal soldier.

For his critics, Rommel was a fame-hungry soldier. For those who experienced his charm and heroism- he was the Desert Fox. A soldier par excellence, a man of valour and might.

In the theatres of war in North Africa, where Field Marshal Rommel waged lone battles against the bludgeoning attacks by the Allies, Rommel made Germans believe. He inspired them to go for all out attack, despite being outnumbered.

It often seemed, no bullet would land near him; no missile had Rommel’s name over it.

Had he not been heavily under-supplied in his final attempts to seize El-Alamein, a remote Egyptian railway halt, Rommel would have gone on to overpower his adversary- Montgomery, who silently admired the Deutscher, having read up ‘Infantry Attacks’.

Even when Hitler ordered that German soldiers should fight till the last bullet, despite running scarily on low ammunition, Rommel refused to let his soldiers die in vain. He would retreat; a soldier of promise.

In these times of gruelling fighting, Rommel did not subject even a single prisoner of war to torture or subjected his captives to slave labour.

If that does not make Germany’s Erwin Rommel a magnanimous icon of chivalry then what will?

How were he to know the sacrilege being committed in the death camps; it was only upon returning to Berlin, coaxed by Hitler to hold responsibility for the fortification of the Atlantic Wall that Rommel swallowed the bullet concerning the truth about the Fuhrer

Not even military giants like Wilhelm Keitel or Alfred Jodl- Rommel’s contemporaries- would muster enough courage to approach the Fuhrer proposing a German surrender. Upon defeats in the Battle of Britain, hammering at Russia suffered by Guderian and with reality biting like nine blistering cannons- Rommel was certain that a German victory was out of question.

But Hitler wouldn’t budge. Ordered to oversee fortification of the Atlantic Wall- the last line of German defense- a disgruntled Rommel would come in contact with a clique of personnel associated with the Fuhrer who wanted to eliminate Hitler.

To this day, it isn’t known for certain whether Rommel played a part in its execution, but the failed July bomb plot served as the final nail in Rommel’s life- which was by now a coffin- his military career jeopardised by Hitler’s refusal of supplying military aid in North Africa and the Fuhrer himself suppressing any scope for armistice.

Soon, Rommel’s name was leaked to Hitler by a coterie of figures in the Wermacht who never quite got along with him and were, unquestionably, as historians argue, jealous of Rommel’s status as a national hero.

Livid, discovering one of his most trusted men was behind the attack on his life, Hitler would send for Bergdorf and Maisel to visit Rommel in Herrlingen, the Field Marshal’s home now put under surveillance.

He would be offered an ultimatum. Prepare for court martial and his family’s death or swallow a tiny cyanide to save his family from extermination.

Ever the dependable family man, Rommel chose to end his life. But it didn’t end the Desert Fox’s legend.

Churchill had cried to the House of Commons when glorifying Rommel, “what else matters but to defeat him”. 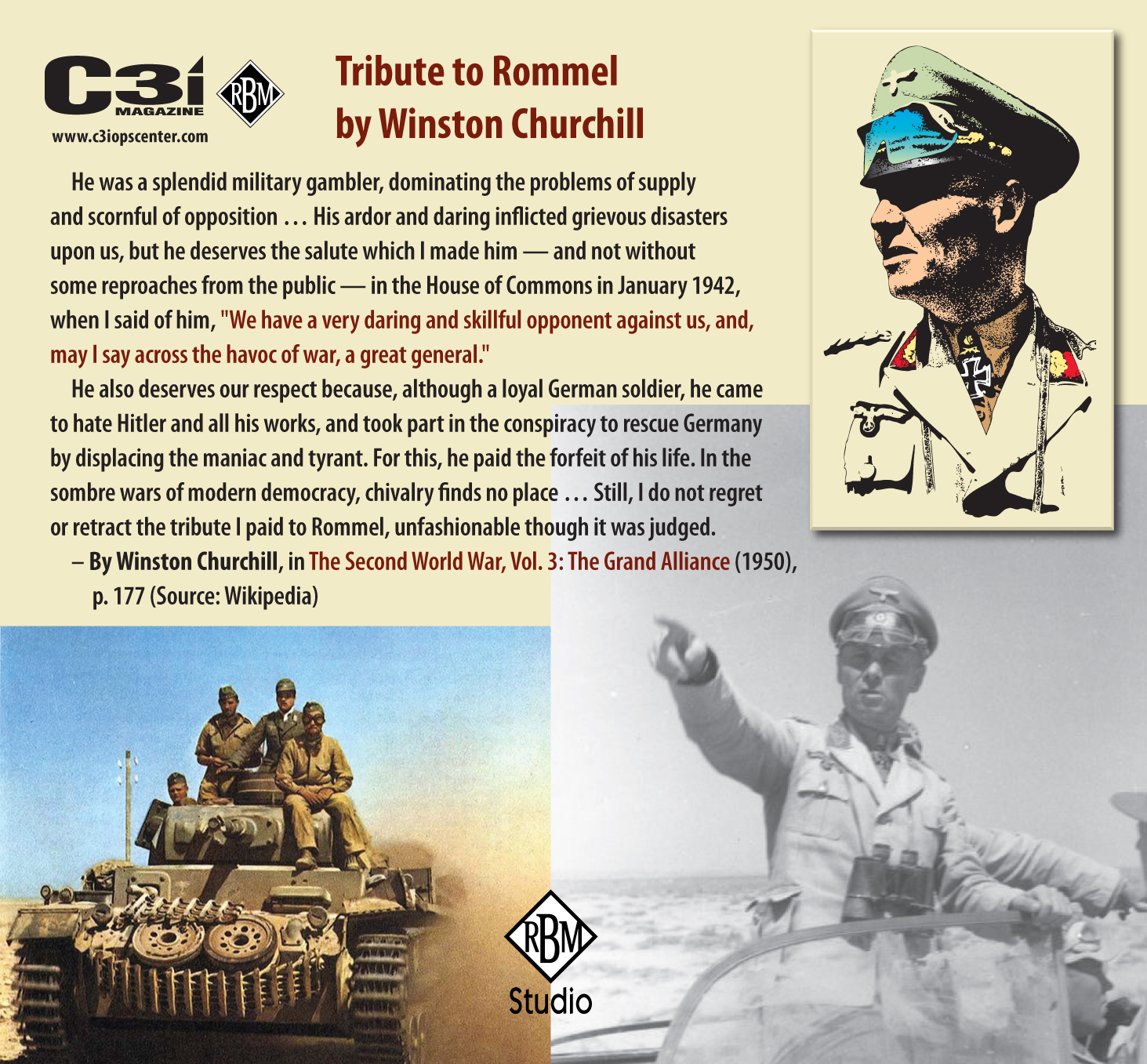 He added, “Across the havoc of war we a very skilful and daring opponent against us, and a darn good general”. This, in effect, summarises the respect Rommel carried from his fiercest rival?

But it also leaves us with a question?

Should Rommel’s legend be painted only in massive salutations for his military genius? Or should a humane touch also celebrate Rommel’s life? It isn’t too inspiring for purists to note that Rommel willingly became a propaganda symbol- imagined by Goebbels- to satiate public’s thirst for a national hero.

But how many Germans were mindful of the horrors of war and spared the captured from the brutalities of incarceration?

Not everyone was Rommel. Was it even possible?

Should Hitler’s favourite General be drenched in colourful elaborations- with awards, military decorations or should he be also thought of as a dedicated family man took his own life, to, albeit dying shockingly, at the hands of the very barbarian he was fighting for.

But then, wasn’t Rommel fighting for the defiance of the ‘Fatherland’. Wasn’t it Germany above the Fuhrer?