Home World Donald Trump Met Kim Kardashian And What Followed Their Meeting Was A... 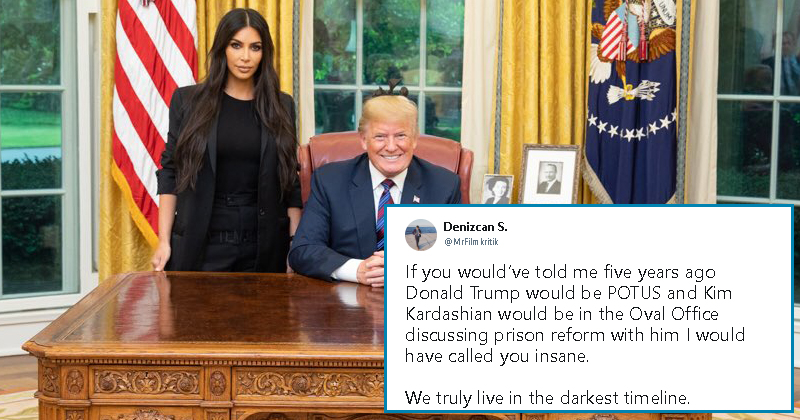 Some of the most interesting and unexpected things have been happening in the and to the White House lately. First Donald Trump became a president and from then on, it seems like anything can happen, and this particular statement definitely has no positive connotation attached to it.

Another thing that happened recently and contributes to this particular scenario is the little meet between Donald Trump and Kim Kardashian.

Yes, you read all of those words right and they do belong together. Mr. President met the Internet’s biggest celebrity to discuss prison reforms, something that Kim Kardashian is very passionate about. The two shared pictures from the event after which people actually felt that this indeed happened and they were not actually dreaming about the entire thing.

Reportedly, Kardashian has been advocating for Alice Marie Johnson — a 62-year-old woman serving a life sentence for a first-time non-violent drug offence, who needs a presidential pardon to be released — and Kardashian helped her get through. Later that evening, she tweeted, ” Happy Birthday Alice Marie Johnson. Today is for you”.

I would like to thank President Trump for his time this afternoon. It is our hope that the President will grant clemency to Ms. Alice Marie Johnson who is serving a life sentence for a first-time, non-violent drug offense.

President Donald Trump too posted the picture and said how great it was meeting Kim K.

These particular tweets gathered a glut of memes and jokes on Twitter, which is pretty obvious. Here’s how Twitter reacted to this meet between Donald Trump and Kim Kardashian.

If you would’ve told me five years ago Donald Trump would be POTUS and Kim Kardashian would be in the Oval Office discussing prison reform with him I would have called you insane.

We truly live in the darkest timeline.

Trump met with the wrong Kim.

When, exactly, did @KimKardashian become an expert on prison reform? Have I slipped into some alternate reality where reality TV stars are experts? Are you going to meet with @OzzyOsbourne tomorrow to discuss cold fusion?

This tweet is a wild ride of ironic nonsense

I thought this was a parody account for a minute and then I remembered, oh it’s just our #Kleptocrat president, the #embarrassmentinchief

Oh SWEET BABY JESUS! When will The Bachelor be contributing to world politics? It's all one big REALITY TV show. Go find a lip kit Kim

Reality show for sure!! ? Kardashian meets Trump.. next episode ??

I’m more and more convinced that trump is filming this entire adventure for a post Presidency reality show. pic.twitter.com/KbGSeLeKNq

Ok just going to say this I don’t dislike Kim K but come on! There are people that dedicated their life to researching and doing things in the community that actually matter to this topic that he could’ve met with. Of all people..Kim k…wow

He will be talking to Homer Simpson about nuclear warfare next time. #LockHimUp.

This photo would only make sense if they were both photoshopped in.

WTF is happening over there!!!! There are no words!!!

have at it, Internet pic.twitter.com/9p9y10xcbn

Donald is wearing KKW Beauty foundation in Nonsensical Screaming Papaya and Kim is sporting creme lipstick in Kanye We Need to Talk pic.twitter.com/zYqZPUK8ka

Fixed @realDonaldTrump and @KimKardashian meeting. It was all a crazy made up scene in the #Shazam movie. pic.twitter.com/VrEg5k7JDI

Feel like our relationship to celebrity is kind of unhealthy pic.twitter.com/FsuKvfOOkp

You have just entered the Twilight Zone. pic.twitter.com/YM0zTFBSuX

While all of these were funny to some extent and extremely harmless, one newspaper decided to take a different route on the story in order to come off more creative than anyone else. Their small experiments soon took a sexist turn and people started calling them out for saying some of the most absurd and uncalled for reaction from New York Post. They mocked Kim K as “Kim Thong Un” and referred to the meeting as “The Other Big Ass Summit” on its front page.

There’s no doubt that this was indeed an offensive reaction to the news and many came forward to say it like it was.

Kim Thong Un. Oh because shes a woman and a clothing item reduces her to a sexualized object. Thanks nypost, classy.

I guess sexual harassment is ok with the liberal media, as long as it isn’t ‘racist’. This is shameful.

I’m not the biggest Kim K fan, but this is in poor taste and sexist.

The hypocrisy here is palpable. Y’all are garbage for making fun of her for doing something so good

You know, I’m not a fan of @KimKardashian, not even a tiny bit, but she’s trying to do what she thinks is right and will help people in the long run. I can respect that.

Please don’t ever print a story about sexism again unless you lead with this cover and how sexist you are as a paper. Utterly ridiculous you printed this. Disgusting.

No matter how hilarious or unexpected the meeting was, the issue behind it was serious and Kim Kardashian is actually doing something good. Just because she’s a celebrity on social media who time and again gets herself into some or the other controversy doesn’t mean that she has no right to be voicing the issues that she believes in. After all, she is working for the life of a woman, someone who has been wrongly accused and might have to spend her entire life in the prison.