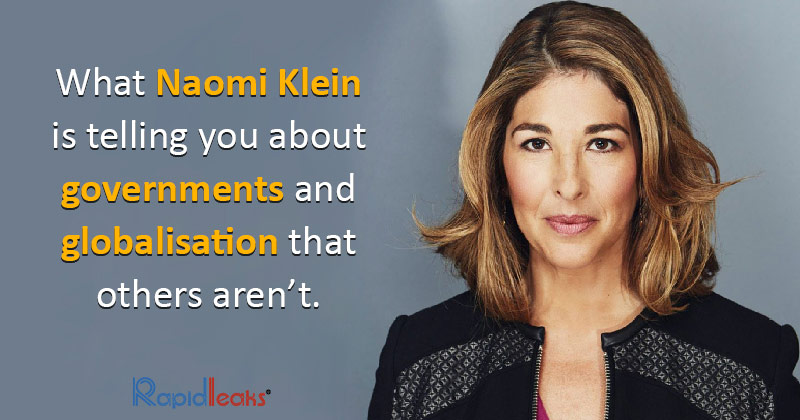 Some copious notes are kept on the table. BBC’s Hard-Talk is on the television. A tuna sandwich is placed inside a brown carry bag. It seems, it’s not been open yet. An unfinished coffee mug sits atop quietly next to a glass of water. On a petite wooden desk, there’s a ruffled collection of a pen and a thick diary and some newspaper cuttings. There are notes- neatly clipped- dripping stats. If there was something like the imaginarium of Naomi Klein- then one could gauge a lot simply from her work-desk.

On May 8, the Canadian journalist turns 48. But it could be suspected the only plans playing in her mind could those concerning her writing. A blog has to be written about Trump. Next up- some discerning notes about falling wages and mediocre working standards of the US labour market. The pitiable anomalies in the US industry: if there is someone who’s going to attempt to bring up a clampdown, who else but Naomi Klein?

Someone’s got to be the champion of the underdog and speak out against the power systems, right? Naomi Klein- a truth teller, perhaps a rare species today in the cluttered world of journalism has been unequivocally speaking against ‘hungry’ power systems in the world whose only aim- it seems- is to increase the gap between the rich and the poor.

You could call her a tireless crusader fighting against government failings and fallacies. Is she a cynic- probably? But then aren’t we all? At the outset, she may seem like a condescending thinker who can do no better than proliferate glaring critiques against the US government, Trump in particular, but there’s more to Klein than meets the eye.

Not since the Canadian journalist has the world seen another raging critic of globalisation and capitalism- the defining parallels of the 21st century. And yet, the world hasn’t seen another fiercely independent thinker perhaps as misunderstood for merely posing questions at how ‘things are and being run’ as Naomi.

No critic today can stand on moral grounds unless he can justify the need to level a criticism. Where many douse in rhetorics, Naomi Klein speaks unabashedly each time a thought-piece is said or written against strategies that define the imposition of neoliberalism. She separates the world from the clamour of corrupt power systems each time she exposes the hidden agenda behind some of the greatest shocks and tragedies of our time- Hurricane Katrina, the economic meltdown of 2008.

The job of a journalist, it might be argued, is somewhere different from an artists’, even as both are creative pursuits. Even as both have to play the antagonist at times, the journalist holds the power and choice to change the narrative that surrounds mankind. Journalists can either look away from the truth or speak up against injustices. Naomi Klein fearlessly does the latter.

Naomi Klein not only opens the pandora’s box that most governments- especially the US- would care to hide but eschews boundaries between public ignorance and the ‘shocks’ deliberately manufactured out there.

It could be said, general oversight does not exist in Naomi Klein’s work or world. We can be glad that someone didn’t turn a blind eye on the suspension of democratic norms during extraordinary times such as the natural disasters confronting the US. We can be glad that someone somewhere raised trenchant criticisms about the US’ attitude of ‘adapting’ to ‘climate change’ which even now hasn’t been admitted in the full wake of the problem.

Should you wish to understand the queries Naomi Klein’s incisive journalistic journey often undertakes, you would have divergent themes:

Putting up meaningful questions and highlighting the dominant nexus between governments and corporations and the epitome of this merger that defines our lives- Naomi Klein goes from unfurling one shock to another without losing the enthusiasm to question the dubious.

For persisting with her spirit of enquiry and producing untarnished journalism in an age where engaging in malarkey is the unsaid rule of sorts, one can’t wait for the next incisive gem from Ms. Klein.