Hugh Hefner Is Gone, But ‘Playboy’ Will Live On

Regardless of who you might be or where you might be at this time, the word ‘sex’ draws attention. It raises brows and commonly- impish glances. We often hear that sex was brought to the world by America, whatever that means. But, then, who brought America closer to sex? Who popularized it? Something considered rugged and wild in parts of the world where development is still perfunctory where matters of intellect are concerned- it doesn’t require one to be a detective to figure it was Hugh Hefner.

Who else? That said in what’s frankly a big loss to the realm of popular culture – Hugh Hefner passed away from natural causes in his Los Angeles home, in California.

Hefner was 91, and until several months ago- not just hail and hearty, rather swinging with rich aplomb.

While thoughts go out to his family, friends and, of course- girls and ladies whose lives he shaped- one wonders about the void Hefner’s left behind in a culture of glitz, style or, oomph.

One also wonders what might be happening in the Playboy world? How big is Hefner’s loss?

Would the term Catastrophic do justice? Satin sheets, red velvet silhouettes, steamy sessions, funky parties and just about anything that suffices ‘living it up’- Hugh Hefner breathed his last in the very mansion he spent decades exemplifying with charm.

Must one also add- with some gravitas. In a world where building a brand from scratch is itself a task easier only to moving a mountain- for such is the immensity of competition- Hefner built not just Playboy, rather an empire of sexdom, if it could be said.

In Hugh Hefner’s ebb stand ‘achievements’ that for sheer immensity attract attention, instead of having to ever crave for it. 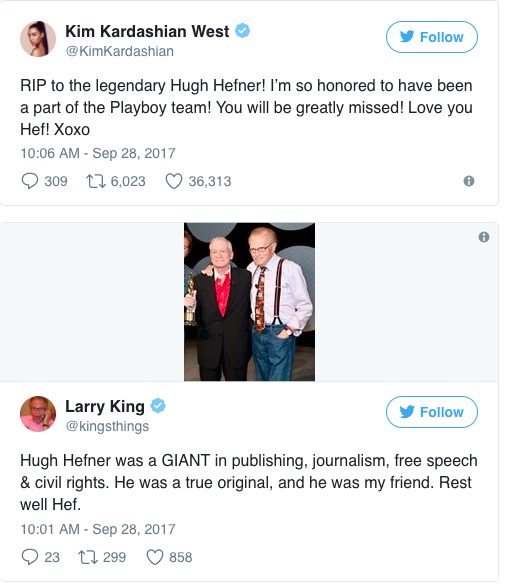 In an era where there’s been no dearth of idols or screen icons- such as Elvis, MJ, The Beatles, and later- Tom Cruise- Hugh Hefner’s rise as a cult figure of being an unapologetic sugar daddy iterated the fact that even media figures (read moguls in his case), outside the realm of Hollywood or Music could enjoy an unparalleled following.

So if Tweets like the one from a certain Roxane Gay, “Whenever I think of Hugh Hefner, I think of baby oil”, aren’t telling here’s what’ll be missed most about the hedonist lad, commonly seen in silk robes.

Whether he was a ‘lecherous pornographer’ as many have called him or a man who made profited by publishing Marilyn Monroe nudes for $500, even then- a huge amount- the world shall miss a feisty business mogul, who unabashedly made millions in selling the world what it secretly craves for.