Home World Americas At the aftermath of the 9/11 tragedy, a few friendships were forged... 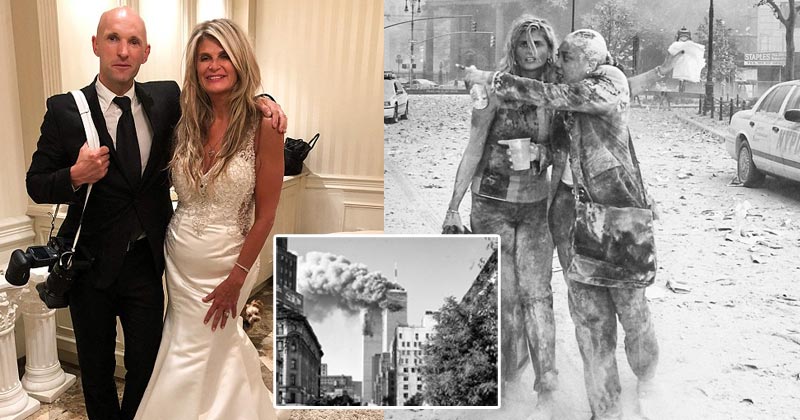 There are sad events, there are shocking events; there are tragedies and then, there’s the 9/11 tragedy. Probably, nothing can ever get worse than that. Can it?

17 years on, as the world moves on, partly reminiscing, partly shaking the head, caught up in an amnesia of thoughts as to how on earth did such a tragedy strike America, there are some lives that have moved on.

And in that regard, it may not be incorrect to say, they’ve moved on from the wake of the 9/11 tragedy quite well. Consider Joanne Capestro. 17 years back, she was single and wasn’t quite sure of marriage.

In the immediate aftermath of the horrific fall of the Twin-Towers, there emerged a picture of a young woman completely covered in dust and rubble, walking in a manner that truly indicated that the world around her had collapsed.

That woman was Joanne Capestro. Another man photographed her and the picture went on to depict the catastrophe that was the 9/11 tragedy in its full fury. Recently, news came in that Joanne Capestro married, exactly 17 years after the horrific events witnessed in 2001.

Interestingly, the very same man who’d taken her photo back then captured her once again on the lens. In ensuring the colloquial fascet of life that it does come a full circle, every now and again, we are reminded that how at the wake of the world’s worst disasters, people get to bond and exchange a smile.

While the backdrop against which some friendships are forged may be chaotic and indicative of tyranny, a true bond between two humans, at the end of the day, scales past fear and doubt.

Probably, there cannot be a better way to think of friendship from the perspective of the (time of) trials and tribulations that it manages to leapfrog. And when it comes to the 9/11 tragedy, there may be very few cases of friendships forged amid horror other than that of Joanne Capestro and Phil Penman.

The two have remained in touch ever since Joanne, who was 39 then, managed to escape from the 87th floor of the WTC’s North Tower.

What would happen immediately, in the aftermath of the North Tower falling into dust, would be the emergence of an image of a tall, mid-aged woman, feeling lucky- as expected- at having escaped the incident, walking barefoot alongside her coworker, covered completely in dust and rubble.

A news report published in the Daily Mail has also shared the following, in regards to the 9/11 tragedy:

Philman spent much of the day taking photos of those who survived the terrorist attacks along with harrowing photos of rescue workers and civilians helping the thousands affected. Penman eventually donated the photo he captured of Capestro along with others to be displayed inside the National September 11 Memorial & Museum.

That image was captured by a New York-based Philman and has, since then, gone on to become one of the most iconic images of individuals who emerged unscathed even at the wake of such a tumultuous incident.

It’s reported that three years ago, Joanne and Phil met for the first time and have ever since, kept in touch. It’s beautiful to note the correspondence of the two. Arguably, at the most important date of her life; can there be anything more important than a marriage, Phil was present to capture her on her wedding day.

Can there be anything more beautiful than that?