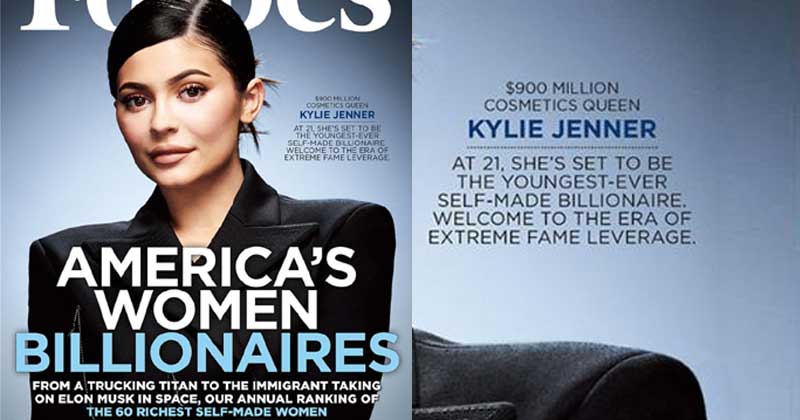 We are living in strange times, let it be said very clearly.

The best football teams return from the mother of all sporting battles with the underdogs biting chewing them off. Real intelligence has created that thing called Artificial Intelligence, Kim Kardashian goes to the White House, Donald Trump and Boris Johnson continue to sport the same hairdo, humans prefer making out with rubber dolls, at times, with inflated ones too, the world’s largest democracy- India- continues to look down on its women and, personalities like Kylie Jenner find themselves on the front page of Forbes.

Armageddon is yet to collide with mother earth and our friends from the extra-terrestrial haven’t yet paid us a visit. Perhaps because some among them are them actually. Wait, are they in the Kardashian house? Sorry, my bad!

Anyways, on a serious note, one of the less sparky news on the Internet has the revered business and economics journal Forbes being trolled online for putting Kylie Jenner on the front cover with a title that says, “self-made billionaire.”

Now, surely everyone including the yesteryear’s Nicolai Tesa to Henry Ford and in the contemporary age, Elon Musk to Mark Zuckerberg isn’t that talented and ‘self-made’ when compared to Kylie Jenner, not to mention, the face with beautiful eyes but artificially pouted lips that resemble Daffy Duck.

What else is one to say? Forbes is amongst the magazines that are not only enlightening and informing in myriad ways, rather a symbol of cohesiveness and perhaps a teller of all the movers and shakers in the dynamic business space.

When someone like that puts Kylie Jenner- on the front cover- of a fashion journal or plainly a magazine devoted entirely to popular culture, even music or films or art for that matter- it might not appear that strange actually.

But when you place someone on the front cover of a magazine who’s neither had to struggle to make ends meet, hasn’t earned a proper professional apprentice in any workplace for that matter and nor has had to stand in long queues and lines to understand to pay one’s bills and deliver one’s cheques, knowing not what it means to sweat and grind oneself out- it is bound to raise a few eyebrows.

You can hardly blame those who are mocking rather funnily the choice that Forbes has made.

This is, of course, in strange polarisation to a popular, rather respected journal that is known to highlight premier, self-made, dazzling business heroes, driven by a will to conquer and defined by success.

There were some who blandly asked the most important question in the first place- “Do Forbes even know what it means to be self-made?”

Try Oprah Winfrey, who was raised on a small Mississippi farm by her grandmother, for self-made *whispers Kylie also isn’t a billionaire yet* pic.twitter.com/UQGrJxno8z

To a larger world out there that hungrily feeds on social media posts perhaps just as much as checking out news updates and blog-posts covering world culture and trending events- this may just have been the mid-week holler that’s meant to be forwarded as a WhatsApp.

And nothing more than that, truth be told. Because people are rightly questioning the intellectual soundness of the magazine that has chosen to ignore personalities like Spanx’s Sara Blakely or America’s very own talk-show hostess, Oprah Winfrey or the one of a kind Ellen Degeneres.

In fact, that Forbes’ fundamental idea is to not only, exclusively speak about millionaires and billionaires, covering personalities from different spectrum of Business, Tech, the Internet of Things, maybe putting on its cover someone like Simon Griffiths, of the social enterprise Who Gives A Crap may have made more sense. Wouldn’t it?

One’s really surprised that Forbes weren’t able to identify anyone from Canada or Western Africa or even Angola for that matter? Wouldn’t there be creative entrepreneurs in a Vietnam at this point in time? None, really?

Now that they have chosen to go for Kylie Jenner, one can only ask if this is a trendsetter or a paradigm shift of sorts? So who’s going to be the next ‘self-made billionaire’? Maybe, pick someone from the Royal family of England?