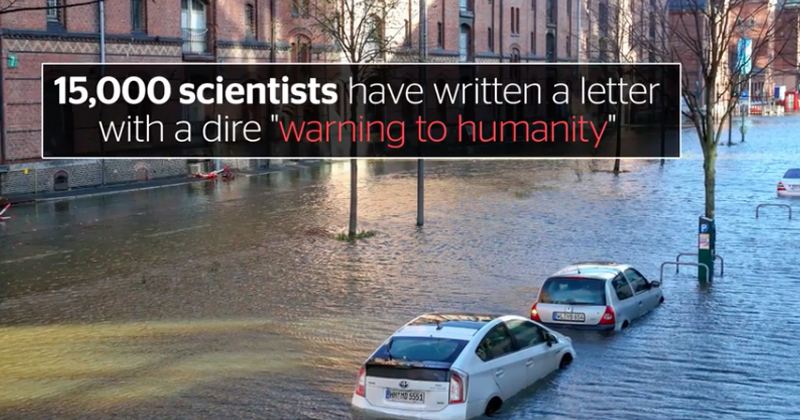 Climate Change. It’s out there. It is for real. No longer a terrifying night-tale that would make one soil in his pants. No longer a figment of imagination that would inspire Hollywood to make a blockbuster.

All of that has been done. But despite several scathing warnings by scientists and environmentalists, conservers and thinkers, the world hasn’t quite pondered over perhaps its greatest nightmare: climate change.

The dangers posed by climate change do not lurk in the dark anymore. We have heard about the melting of glaciers and wild forests everywhere- be it in the hinterland of Australia or in the bustling California. So recently when as many as 15,000 scientists from around the world came together to extend a catastrophic warning about climate change to humanity, one thought about the famous Naomi Watts saga, “The Impossible”.

So here’s what just happened.

A letter was posted recently from the Union of Concerned Scientists that was backed by as many as 1,700 signatures about 25 years ago. But the world has changed quite a bit from way back in 1992.

Rather, it has worsened. Hasn’t it? Scientists are of the view that mankind is still facing an existential threat of runaway consumption of limited resources. The population, multiplying as we speak, adding insult to injury.

The letter openly criticises media influencers and common citizens for not doing enough about a mortal danger. Climate change, could of course be likened to a ticking time bomb. We are just sitting over it; unmoved by the catastrophe that has begun knocking on our doors.

What would compound human misery, scientists fear, would be the humongous biodiversity loss if the world doesn’t put its act together on climate change. The letter, carried out extensively by the British media finds revered online daily ‘The Independent’ saying it loud and clear, “ Soon, it will be too late to shift course away from our failing trajectory, and time is running out”.