Home Videos Chris Gayle Is Celebrating After Winning The T20 World Semi-Final And He... 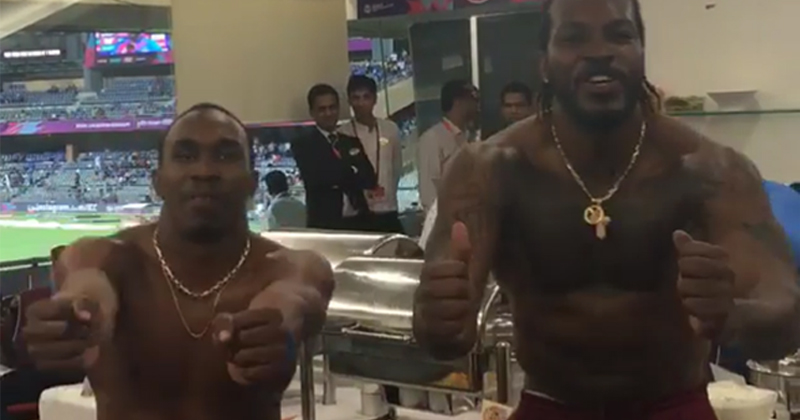 There is something about the way West Indies team celebrates their win. Yesterday they won the Semi-final match against India of World T20 2016 and what they did is hilariously amazing. Social media already know about the famous Chris Gayle “Gangnam Style” performance in 2012 World Cup but this time what Chris and the rest of the team performed is epic.

Gayle, Bravo and other team members of West Indies were spotted being high on spirits the dressing room and they were seen dancing last night. Bravo, Darren Sammy and Gayle were dancing on typical ‘DJ’ Bravo’s ‘Champion’ Music and it is fun as hell. The bright smile on their faces and the awkward yet funny dance moves will make you fall while laughing.

That was not it after that they took their celebrating mood to their hotel where they delighted their fans with their reggae dance. They continue to dance from the hotel lobby to the hall to all the way to the elevator. Fans went crazy to see them in such happy mood and their groovy moves put a smile on the faces of the fans.

Now THIS is how you celebrate a semi-final win!

Imagine if the celebration winning semi-final is this. What will happen if they won T20 World Cup? Meanwhile, scream Champion, Champion!!