Foreigners doing anything Indian or speaking Hindi has always resulted in major outbreaks on the Internet. After all, we all have binged watched these kinds of videos at some point or the other in our lives, haven’t we?

Now, if you’ve ever dived into the whirlpool of content like this then you would be aware of the fact that there’s a ton of it available on the mighty Internet. However, you would have seen nothing like this particular video shared by Gunjan Bandhu on her Facebook which has now gone viral and all for good reasons.

She got hold of an Aussie in a Texas superstore and decided to film their conversations on camera to share it with her friends and family, and quite possibly the world too. The man speaks perfect Hindi and a near-perfect Bihari accent, and you won’t even believe the entire clip at first.

The ease with which he speaks Hindi is absolutely amazing and this has been possible due to all the years that he spent in the country, as he explains in the video. While we don’t know this gentleman’s name, he tells that he has been living in India from 1972 to 1978 and he learned Hindi over this time in the country. He also explains that he has lived and worked in Sri Lanka, Bangladesh, Pakistan, and Nepal. So he would return to India whenever he would get a chance. In fact, he is returning to India now to start a company.

Isn’t it just amazing to see someone acing the language that you and I communicate in every day. More than that, it’s so amazing to see how brilliantly the man has been able to grasp the Bihari accent and on top of all that, it’s amazing to see his love for the country. At one point in the video, he also says that whenever anyone asks him where he is from, he says that he’s a Kashmiri Brahmin. We wish him more amazing time in the country. 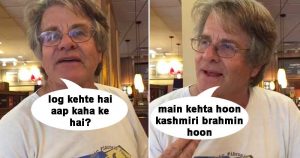