Home Videos AIB Does It Again With ‘An Ode To Karni Sena,’ Gives A... 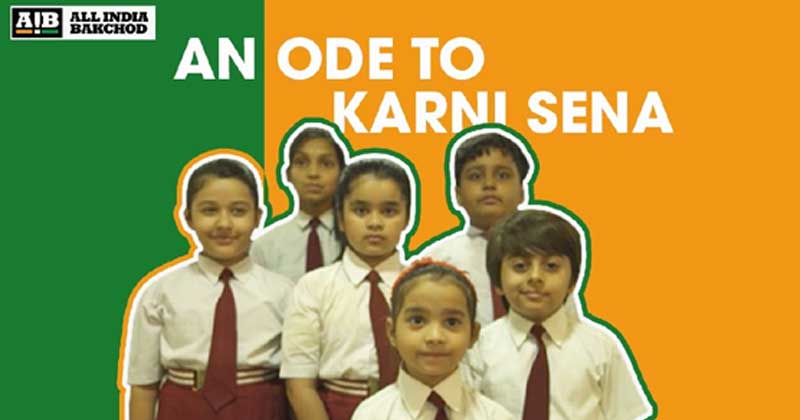 In January 2018, there was no Padmavati or Padmaavat, there was just a movie release that led to tons of kids being scared to death in a school bus, all thanks again to the same sena that decided to attack a bus full of school kids, in Gujarat. All of this was done to save the pride of a fictional queen in a fictional movie, involving fictitious characters from a poem, but all of that indeed led to non-fictitious young lives being in danger.

One can’t even think about what must have gone through the minds of those young kids on the school bus. Most of them wouldn’t have even known about the whole Padmaavat and Sanjay Leela Bhansali controversy, yet they became one of the most crucial parts of it.

The story shook the entire country and even reached an international level where people finally started questioning them.

On this past Saturday, the Karni Sena decided to take back their protest as they felt that the movie indeed serves to the Rajput glory. We all know about the real reason behind this protest, something that is behind almost everything that happens in the country, elections and vote banks. But, in midst of all that we forget about all the lives that get involved in it.

Much like before, AIB (All India Bakchod) decided to put the right message forward regarding this issue, with a whole lot of sarcasm in it. They gathered a bunch of kids in a school bus and titled the entire scenario as – “Two weeks ago, the brave members of the Karni Sena managed to crack down on a bus full of anti-social elements. We managed to find exclusive footage from inside the vehicle.”

An Ode To Karni Sena: Watch The Video Over Here:

To best honest, it breaks our heart to listen to all that those kids had to say, but somehow, isn’t it all true? Each and every word, as well as line in the video, state the obvious truth about our society and maybe that’s why it’s so frustrating to watch it.

As for AIB, thanks for doing something like this. Maybe through these kids, the world would get to see a clearer stance on everything that happened in the last few months.