Home Trending Here’s How A Bunch Of Singles Explained #WhyImSingle, Is This Your Reason... 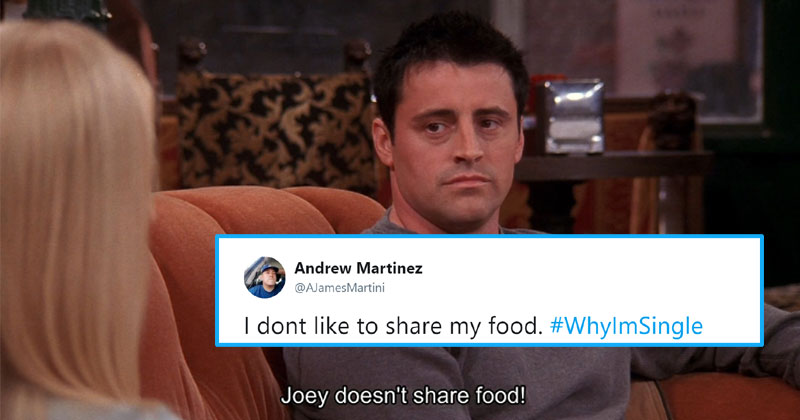 Valentine’s Day is approaching. You know what that means? A bunch of couples will roam around in public, hands in hands and be all romantic and stuff, while completely making the lives of all the single people, miserable. All of us singles have been through the same story, year after year.

After all, you know what they say, being single is amazing, except for Valentine’s week and Holidays because that is the exact time when everyone seems to have a special someone, except for you. Admit it, we all have been here and felt exactly the same. While some did it confidently by blasting the news to the world, others bury in the dark corners of their confide rooms and admit it to no one else but themselves.

However, a bunch of people on Twitter, the micro-blogging site connecting the world with 480 characters at a time, have come out of their blues to share the real reason behind #WhyImSingle (not me, but they).

Here are some of the best from the lot that spoke directly to us and were very relatable.

Me reading #WhyImSingle tweets: nice to see so many single people still out there.

Also me: this is the pool i have to choose from?

Me just thinking about trying to talk to the guy or girl I like… #WhyImSingle pic.twitter.com/62kyAQF2CL

I eat Doritos too loudly. #WhyImSingle

“You died alone because you couldn’t commit to anyone" who?! #WhyImSingle pic.twitter.com/AXhTpWXstu

Guy: Hey are you free this weekend?

Most gay men hate me. #WhyImSingle

Because “my future husband is lost and refuses to ask for directions.” — @lisadharper #WhyImSingle pic.twitter.com/pdcZ4vB27c

#whyimsingle He said “fix your attitude or leave and…. pic.twitter.com/fRPOwwnnDE

#WhyImSingle I crush on too many celebrities or fictional characters, meaning I have unreasonably high expectations ??‍♀️

#WhyImSingle
me: i want a boyfriend
boy: hi
me: pic.twitter.com/eRNIWK7UMl

#WhyImSingle Apparently, I have to go outside and let people see me.

Now, this might be the actual reason why all the singles are really single.

Now that you’re done with this list, what is your reason for being single this Valentine’s because let’s be real, if you were not, you wouldn’t have been here reading this.