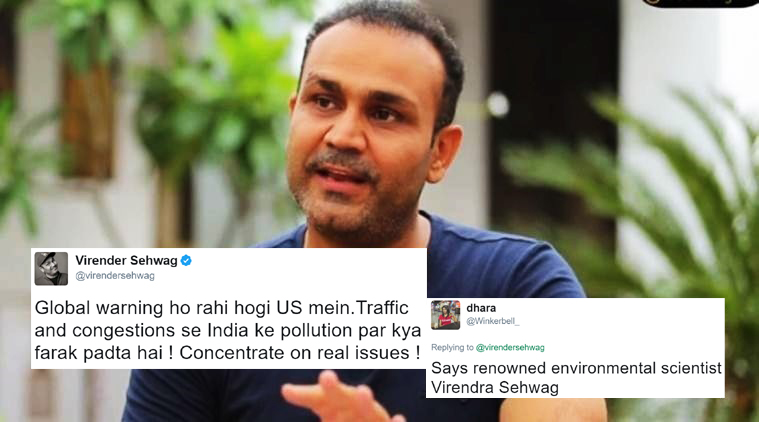 Virender Sehwag, who has managed to stand on Twitter with his hilarious take on almost everything that is happening all over the world, made one of the biggest mistakes by ruling out Global Warming as the biggest issue on the planet and Yes, it came after Donald Trump decided to take the US out of the Paris Climate Agreement.

For those who are not aware of the Paris Climate Agreement and Donald Trump’s decision, long story short, the US President thinks that despite the country being the second largest emitter of greenhouse gases, it should have been given a fair stand in the Paris Agreement because the terms are going to be harsh on the US’ financial as well as economic burdens as 2.7 million people could lose their jobs. Donald Trump, in his satirical style, also highlighted the fact that India will be allowed to double its coal production by the year 2025 while China is going to increase its carbon footprint till 2030.

Out of the blue, there came a Tweet at 11:30 pm on Thursday and it was none other than Virender Sehwag, giving his opinion on Donald Trump’s decision.

Now it’s time to spill the beans. Well, Virender Sehwag’s tweets are always about humor but this time people took this joke seriously and delivered a yorker after yorker to the former Indian opener.

Global warming IS THE REAL ISSUE. Biggest threat to our Planet. In your school, hire qualified Science teachers who don't talk like you. Thx

Oh God he has a school!

Global warming is real not hoax. It affects the planet and India is in Earth not some far away galaxy Paaji. What are you smoking?

You should be tweeting more responsibly when millions of people take your words for the truth.

Sir, we welcome your concern for real issues. pic.twitter.com/GZNlWN1Nic

This cow bows to your scientific temper. Quite amazing. pic.twitter.com/yEHP6XurlO

And fans that got the sarcasm

2 minutes of silence for the people who have not got the sarcasm embedded in these words!

He is being sarcastic,

The timing of this tweet couldn’t have been worse as Virender Sehwag has applied for the job of India’s head coach and this might be the negative publicity that Veeru Paaji never needed.