Twitter Reacts To Flipkart And Walmart Deal Worth $16 Billion

Home » Twitter Reacts To Flipkart And Walmart Deal Worth $16 Billion

If you’re not living under a literal rock, then you’ll be well aware of the trade between India’s Flipkart and US’s Walmart that took place yesterday and left the entire country in shock. SoftBank founder and CEO Masayoshi Son confirmed that the US-based retailer Walmart will acquire a controlling stake in Flipkart, making it the biggest deal in India’s e-commerce sector, a day before the actual deal and the entire thing got much talking.

Not only the biggest M&A (merger and acquisition) in India, this deal also marks the entry of Walmart into the Indian retail business. This step is considered to be a huge stepping stone for the company in terms of competing with its biggest competitor Amazon, which has left Walmart behind in terms of business.

Walmart’s entry to the e-commerce section will accelerate the push towards e-tail commerce in the country. According to Walmart’s investor presentation, India’s e-commerce market is projected to grow four times faster than total retail over the next five years. The entire thing is considered to be a dream come true for some, however, there are many who are not happy about this Flipkart acquisition by Walmart.

Economic wings of various political parties have come forward to denounce the move. RSS economic wing called this merger and acquisition as a move to “hurt national interests” and asked the Prime Minister to do something about it. They also said that this acquisition “will not only kill entrepreneurship, and is anti-farmers but will also kill job creation opportunities in the market.”

Just hours after the news of Flipkart acquisition by Walmart hit the media, Flipkart’s co-founder Sachin Bansal announced his exit from the company, as he promised a few days earlier. He announced his decision through Facebook and wrote, “Flipkart truly upheld audacity and customer centricity and I got to work with the best people. We took on some of the biggest challenges and solved many complex problems for India,” Sachin said. “Sadly my work here is done and after 10 years, it’s time to hand over the baton and move on from Flipkart. But I’ll be watching and cheering from the outside — Flipsters, you better continue to do a good job!”

This entire Flipkart and Walmart deal is a big deal in the Indian and international market. Along with Flipkart, the acquisition would add the company’s other platforms such as fashion e-tailers Myntra and Jabong, digital payment firm PhonePe, and logistics arm Ekart to Walmart’s portfolio.

Reacting to the gravity of this news, people on Twitter couldn’t help but make few puns on this occasion and we’ll be honest, they’re seriously funny. Check them out here:

How about Walfart ?😂 #Walmart #Flipkart #WalmartFlipkartDeal

Walmart buys flipkart and there lie in rest the founders of flip kart finally to have earned a good amount out of their shitty project.

Who called it 'Walmart is buying Flipkart' and not a 'Fai-Retail Wedding'?

Why Walmart purchased Flipkart for $20 Billion?
They could have downloaded it for free from playstore!#FlipkartWalmartDeal #WalmartFlipkartDeal

Can Walmart return the Flipkart within 30 days of purchase according to Flipkart's return policy? #FlipkartWalmartDeal

A day after the news was made official, Walmart announced that they’re now going to work in full swing, in terms of their cash and carry business plan. The company announced that they’ll be adding 50 new stores in the country in next four-five years. As of now, Walmart has almost 20 stores in the country, and they’ll be opening five more in this current year. After this, they have decided to pick up the pace and open 12-15 stores every year. Walmart currently operates in 9 states and 19 cities and the future expansion is focused on more or less the same geographies.

Home » Twitter Reacts To Flipkart And Walmart Deal Worth $16 Billion 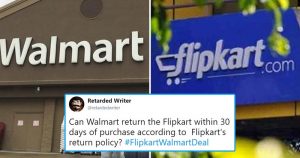 Twitter Reacts To Flipkart And Walmart Deal Worth $16 Billion