Home Trending Rishi Kapoor Bats About Gender Equality At The IPL Auction And It... 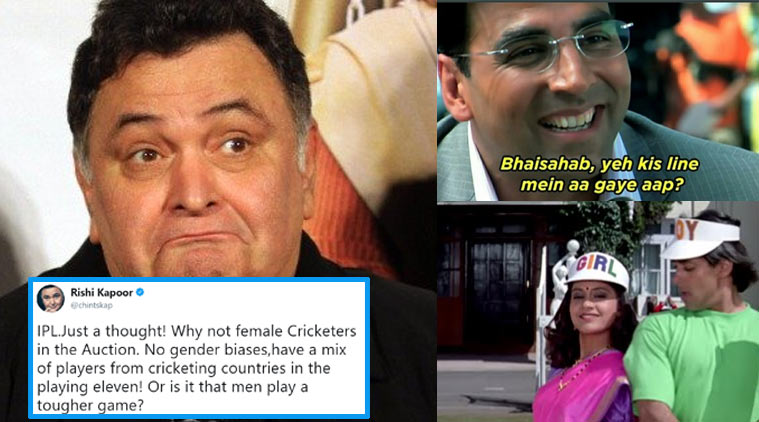 Rishi Kapoor on Twitter is quite different from the Rishi Kapoor, most of this country grew up watching and no one can deny this fact. We all have been served some real harsh truth by the veteran actor, who’s quite passionate and vocal about various things that are happening in this country.

While he’s not right all the time, he indeed has marked the need for more vocal celebrities in the industry.

Rishi Kapoor tweeted out, “No gender biases, have a mix of players from cricketing countries in the playing eleven! Or is it that men play a tougher game?”

IPL.Just a thought! Why not female Cricketers in the Auction. No gender biases,have a mix of players from cricketing countries in the playing eleven! Or is it that men play a tougher game?

As weird as the thought might sound, it indeed was asked by the actor and following the tweet was a whirlwind of reactions. While some were applauding the man for his thought, others just wanted to know how intoxicated he was.

Some followers of the actor came forward to ask the most important question in this Tweet.

@chintskap As if it was not tried!

But then there were some who really gave a thought to Rishi Kapoor’s thought and didn’t let him down in his thinking process.

@chintskap And a very powerful thought, let’s make it happen

@chintskap They have women’s cricket too. Mixed Doubles will take a long time to be introduced in Cricket!

@chintskap Given the physical requirements of the game, don’t think it would be fair to have women compete with men but all for a separate ladies version of the IPL. Australia already has it and markets it very well.

@_deepaktiwari @chintskap As per my experience Women can manage both home n outside work efficiently…. But I have hardly seen men do that…

No matter what the reactions were, this single thought ignites the question, would we be able to see mixed doubles in the game of cricket, anytime soon?