Home Trending After The Recent Ola Incident, A Bunch Of People Are Cancelling Their... 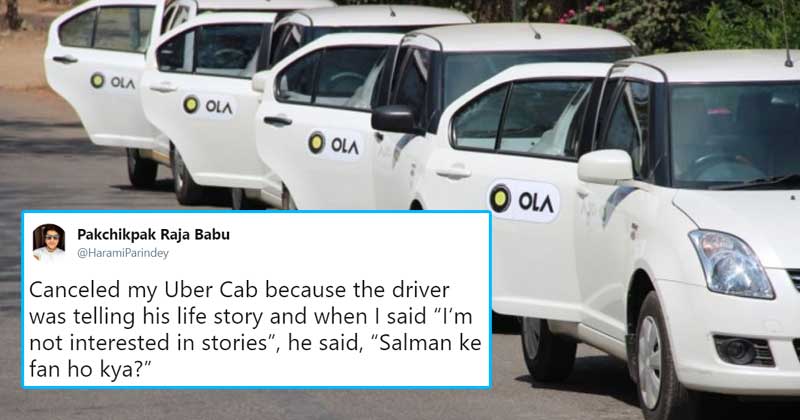 A few days back a man from UP, Abhishek Mishra, the social media manager of Vishwa Hindu Parishad, cancelled his Ola as the driver assigned to his trip was Muslim. The man shamelessly bashed his ‘somehow’ achievement on Twitter which not only invoked a huge social media outrage but also got the cab service talking. Ola responded to Mishra’s tweet with some fine fundamentals of our country, served to him. The company also said that they’ll take an appropriate action against the man.

Now that’s something not only inspirational but also a great medium through which one can be taught that bigotry would not be tolerated in the country. And, anyone who tries to invoke any kind of hatred among certain kind of people would be served what they deserve, no matter what privilege they come from.

But, much like everything, Twitterati found a certain kind of comedy even this too which is can easily spot in the new trend, people on Twitter are trying their hands on. A bunch of people are now narrating their weird and funny reasons for cancelling a cab. Apparently, they’re all cancelling cabs and that has nothing to invoke hate on certain people, but to let certain know how stupid the entire thing sounds to others.

Check out some of these hilarious reasons for cancelling the cabs, over here and die laughing.

Canceled my Uber Cab because the driver was telling his life story and when I said “I‘m not interested in stories”, he said, “Salman ke fan ho kya?”

Canceled my Ola Cab because the driver's name was Lalu Yadav and I'm so useless that my parents won't pay the ransom if I get kidnapped.

Canceled my Ola Cab because driver's name was bumrah and he was crossing lines. #MIvRR

Canceled Ola cab because.. Loljk just checked my aukaat, I can't afford to cancel it.

Canceled my Ola Cab because the driver's name was Bachcha Yadav and he didn't like it when I had an eye contact with him in the rear view mirror.

Canceled my Ola Cab because the driver's name was Aditya Roy Kapoor and he asked me if I wanted to share whiskey with him in the cab.

Canceled an ola cab booking yesterday because the driver's name was himesh n I don't Wanna die ( ??) on the way to my destination?

Canceled an ola cab coz driver name was arvind kejriwal and he would keep taking u turns and ll never make it to my destination.

@aartic02 what a coincidence, I also canceled my booking of Ola Cab, because driver name was Narendra….. Because always try to take U Turn…..

I Canceled my ola cab booking because the driver's last name was Modi.

Canceled my ola cab because… pic.twitter.com/Tq7c1uOXgU

Cancelled Ola Cab because I don't believe in god. pic.twitter.com/CrZMb8SalA

No matter how serious or critical a situation, Twitter never fails to bring out the comedy in it and provide their own twist on it.