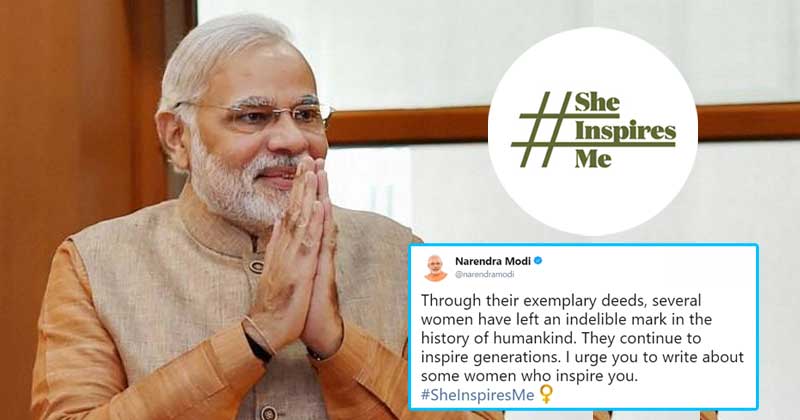 While some brands and companies consider women’s day to be just another great day for marketing and advertising their products and services, in some parts of the world people actually celebrate the women in their lives and around them for existing with confidence and attitude, despite being shunned as a weaker gender in all walks of life.

This women’s day Prime Minister Narendra Modi went on Twitter and wrote, “Through their exemplary deeds, several women have left an indelible mark in the history of humankind. They continue to inspire generations. I urge you to write about some women who inspire you. #SheInspiresMe.” Soon, several people from PM Modi’s 40.9 Million followers came forward with their tribute to the women who have inspired them. Particularly, politicians and celebrities in the country.

Through their exemplary deeds, several women have left an indelible mark in the history of humankind. They continue to inspire generations. I urge you to write about some women who inspire you. #SheInspiresMe

#SheInspiresMe– Kunwar Bai, who died earlier this year at the age of 106. Hailing from Chhattisgarh, she sold her goats in order to build toilets. Her contribution towards a Swachh Bharat can never be forgotten. I am deeply inspired by her noble gesture. pic.twitter.com/eANQz01ZYE

While some went ahead with inspiring female figures in the country, others took a closer look at surroundings to find the woman that inspires them the most.

Mothers were particularly the biggest one to get this ode, well, because, they’re mothers and the most selfless creatures on this planet for their kids. In the whirlpool of so many tweets, a particular tweet from Smriti Irani stood out in the crowd. She stated that Sushma Swaraj has been the women in her life who inspires her the most, and tweeted, “From a young minister at 25 to redefining citizens outreach as EAM, @SushmaSwaraj Ji made us believe every goal can be achieved through sheer hard work. A powerhouse in administration and Sangathan – #SheInspiresMe!”

From a young minister at 25 to redefining citizens outreach as EAM, @SushmaSwaraj ji made us believe every goal can be achieved through sheer hard work. A powerhouse in administration and Sangathan – #SheInspiresMe! pic.twitter.com/hiOGM8zzOI

Check out other tweets over here:

Rukmini Devi Arundale, was an Indian theosophist, choreographer, Bharatanatyam dancer, an influential opinion-maker. Took up the cause of Bharatanatyam, considered a vulgar art in the early 1920s. #SheInspiresMe pic.twitter.com/EXV49HrJd1

Subhasini Mistry forged ahead with a dream, determined to succeed against all odds; channelised a personal tragedy to serve a greater good –#SheInspiresMe! pic.twitter.com/eVJiVDHhYm

#SheInspiresMe– I'm proud of Anshu Janshenpa the first woman in the world to achieve two double ascent of Mt. Everest & a double ascent in 5 days! I salute her on #InternationalWomensDay pic.twitter.com/Bj5zvBLnDR

Rani Mangammal (1689-1704) #மங்கம்மாள் of the Madurai Nayaka rulers. During her reign Madurai first came into direct contact with Delhi – the Mughal Empire. Was known for her diplomatic, political skills & military campaigns. Her capital was Tiruchi. #SheInspiresMe pic.twitter.com/VoDQgX20mu

My mother inspires me to believe in myself and have atmost faith on god. @SushmaSwaraj mam inspires me to work hard and lead for the nation’s interest. #SheInspiresMe pic.twitter.com/R3J5SHbUgs

With her activism, courage, compassion, love, strength, values, all she stands and fights for, @ladygaga is redefining what it means to be a leader in today’s society. #WomensDay

Celebrate #IWD2018 by sharing who inspires YOU to be the best version of yourself. #SheInspiresMe pic.twitter.com/IJ2fwfGFep

A society is only as strong as its women.

This Women's Day, let's salute the women who have made us proud and rise for the ones who are yet to get their share of dreams.
Happy #WomensDay #SheInspiresMe #NariShakti4NewIndia pic.twitter.com/xOhHWf1y26

My mother used to always tell me to perform my duties with utmost honesty. That's the power of a mother and a woman. #Respect forever. #SheInspiresMe #IWD2018 pic.twitter.com/bDbcTIfvwC

She was a child courier for the resistance during WWII, followed her heart in life and love, remained humble in spite of great fame, and did beautiful work for children around the world as a Unicef ambassador.
Audrey Hepburn: #SheInspiresMe #InternationalWomenDay2018 pic.twitter.com/bMj9eCxlvZ

I can write a million word for all the women in the world but no one like my mom #SheInspiresMe  at every step of my life . pic.twitter.com/145VB1Plk1

#Womenday #SheInspiresMe “My Old Granny Is Gold For Me”. I always used to celebrate pollutionfree festivals with her as she likes eco friendly celebrations O My Lovely Granny,u r my angel O my lovely Granny, I m a seed, U r
my soil,which support,
me ,nurture me into sapling, pic.twitter.com/XBGUHir796

My wife Prachee supported me all through my life. She encouraged me to leave my secured Bank job and pursue my passion for social and political work. #SheInspiresMe pic.twitter.com/kvBKIx0K52

From this #InternationalWomensDay, Ajni Railway station in Nagpur will be managed by an all-women staff, making it the third all-women railway station in the country after Matunga in Mumbai and Gandhinagar in Jaipur. #SheInspiresMehttps://t.co/02zxxDeBsO

#SheInspiresMe – I'm proud of all the courageous women in our Central Armed Forces. As directed by PM @narendramodi ji 33% of Central Armed Forces will be women. I salute the hard work and dedication of each of our female warriors #InternationalWomensDay pic.twitter.com/myQJTQ2Urj

#MyGrandmotherInspiresMe ! The way she has lived her life; the most perfection with least resources (Y) #Respect #Idol https://t.co/D0EUfsxLRS pic.twitter.com/VR8J805amF

That’s exactly how women would like to celebrate their Women’s Day, by saying a heartfelt thank you to other women and supporting them. After all, women supporting women is the reality we all want to live by and only “empowered women can empower women”.