The people behind making a meme and then spreading it like a wildfire, are so active that a new meme gets viral every other day. While some might hate it, because of obvious reasons, others have grown accustomed to how the phenomenon works which is why they continue to indulge in them.

Adhering to the phenomenon, there’s another meme going viral like a wildfire, but it has something special to it. We all know the basic definition of a meme, something that combines reality and comedy together and gives something utterly useless but eventually funny enough to lighten up a moment. However, this particular meme called ‘is this a pigeon’ meme is doing something more.

They are using it now to voice their anguish, sorrow and most importantly, confusion using the picture and obviously, by giving it different contexts. Taken from the third episode of the anime The Brave Fighter of Sun Fighbird, the scene is that of an alien android Yutaro Katori under the ‘disguise’ of a man. However, he is proved wrong as he mistakes a butterfly for a pigeon.

People are contributing to the ‘is this a pigeon’ meme by making them more intellectual and socially woke about different things and to be honest, they’re equally funny. Check out some of the best from the lot over here:

The “is this a pigeon” meme is my favorite meme of 2028 so far, especially this one pic.twitter.com/75AMMxEodh

i love is this a pigeon memes lol pic.twitter.com/yRl3r7vPUG

My take on ‘is this a pigeon’ meme pic.twitter.com/NeJwCXPX24

Just in case there weren’t enough is this a pigeon memes on your feed already pic.twitter.com/3UDhYyMm1e

is this a pigeon meme social commentary edition pic.twitter.com/5gS4cb2rGe

These ‘is this a pigeon’ memes are absolutely great and hilarious. 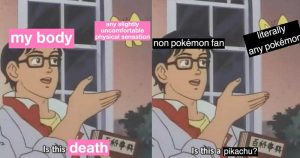