The Internet is not just the place where one can find the answer to their problems and queries, it has grown to be much more than just that. Contributing to such success of Internet’s evolution has to be the social media. These are the outlets where the population of Internet spends most of their time doing some of the most random things ever and this time they’ve contributed to another most random of the random memes.

Now if you’re someone who does not know the backstory of this very thing, here it’s. Gru is one of the lead characters of movie franchise – Despicable Me. He has a very heavy Eastern-European accent and when he calls his girls, it ends up sounding like ‘gorls’. To be honest, there’s nothing major about this entire thing just a typo, however, that is not at all the way people on Twitter took it.

They immediately started incorporating gorls into our everyday things, most importantly, Bollywood movies and songs. What followed this are tons of memes with no solid backstory but just utter randomness and maybe that’s what makes these memes so popular and funny. Check out some of the tweets with gorls in them, over here:

Gorl I need you pic.twitter.com/01IVB56MiL

“all hot gorls put ur hands up and say,
OM SHANTIII OMMMM” pic.twitter.com/A6TRvx2SJJ

Who runs the world?
Gorls pic.twitter.com/jV5kiGZWkJ

I’m a barbie gorl, in a barbie world pic.twitter.com/dTbN74fZCE

Hey hey you you I don’t like your gorlfriend pic.twitter.com/CD4OPFscxP

i dont mean to be a bother but have you seen this gorl? pic.twitter.com/I6YUgHIXSL

“I wish that I had Jessie’s gorl” pic.twitter.com/BON96YT9y5

Well I found a gorl
Beautiful and sweet pic.twitter.com/XSVe0YMcSk

Even the ones who created the Internet would have never thought it to be a place that is full of funny randomness that it has turned into one, today. 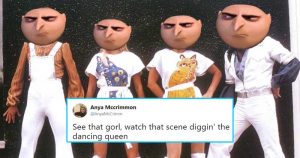