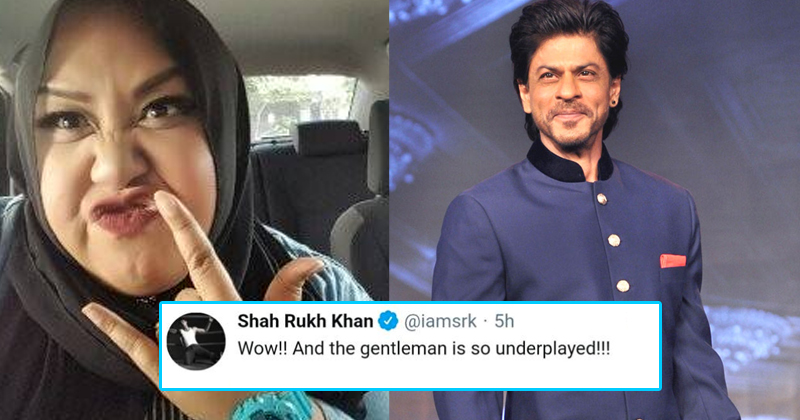 To woo Shah Rukh Khan is not easy as pie but Meera James aka Malaysia Kak Girl has nailed it right on point. Meera James is becoming the latest social media obsession for doing silent Car Karaoke on Hindi songs and from her expressions to lip sync is so accurate that you will be bound to bite your lips.

Meera James is a YouTuber who has become the latest favorite of many Facebook worms, Twitterati and Instagrammers. Her sassy expressions will keep your eyes glued to the screen even after realizing that she is mimicking all those lyrics without even understand a word.

She has been doing it even before but looks like Bollywood Badshah has made this “hip, happening and sassy woman” the craze amongst Indians after he tweeted about her video of ” Bole Chudiyan.

Well, that’s not the only video she has done, although, this is certainly the video that is going viral but, we have more in store for you.

Her performance is completely Jaw-Dropping. However, she forgets a few words but who cares when her expressions are that?

Even Salman Khan failed to project so many expressions in the original song. You will definitely love this one.

How the hell she managed to make this song so entertaining. Her funky expressions made this song sound like more fun.

This one is the best. Each beat and her expressions and her lip sync – Just two words for the combo – Hats Off!

Haven’t you fallen in love with her already? The best part is that the partner of Meera is driving with a straight face which makes her look the star of the video. We guess that’s why a great team always climb the ladder of success.