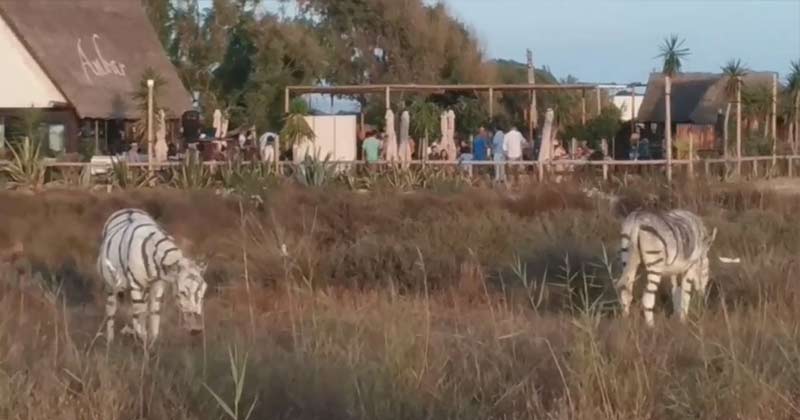 Here’s a simple piece of truth. A donkey is a donkey and well, a zebra is a zebra. Entire Africa understands it. The entire world understands it. Yet, someone in Spain thought this would be funny and would make for something rather incredible.

So here’s the heart of the matter. A couple of donkeys in Spain were recently painted and presented as zebras for a lavish wedding that was themed on a wildlife safari. But the occasional joke didn’t exactly go unnoticed and soon, the rather weird-looking spectacle was splashed across many of Spain’s national and international media- including magazines and websites.

And thus, we saw a huge hue and cry emanating from what someone thought would have easily be shoved under the carpet. But guess what? It just wasn’t to be.

So here’s what happened exactly.

Two donkeys were painted in all black-and-white and presented as zebras in a Spanish beach town. This was for a widely-attended wedding that was themed on a salubrious safari idea. The outrage that the incident caused was rather unexpected and wide-ranging reactions got everyone talking about the incident on the online world.

In the noted publication Herrera Pelaez, a noted journalist wrote that “donkeys are in danger of facing extinction and are being used for tourist exploitation.”

The controversial incident took place in a noted beach resort town in Spain that goes by the name of El Palmar, a town in Cadiz.

Soon, an onlooker, enraged by the incident reported the entire story to animal rights activists. That said, it’s not entirely surprising how controversial episodes soon trickle into being debated around the world. Once the news reached India, respected news platform NDTV reported on it as well and shared the following in its report:

“It is shameful, poor animals,” wrote one person in the comments section.  “Did they really need to paint donkeys for a wedding?” another questioned.

According to Andalucia Informacion, the case was brought to the attention of the Agricultural and Commercial Office (OCA), as well as the Nature Protection Service of Spain. An investigation into the incident has been opened.

That being said, one wonders to what extent can man go in using animals in the name of fun or recreation? Shouldn’t all of this stop once and for all?