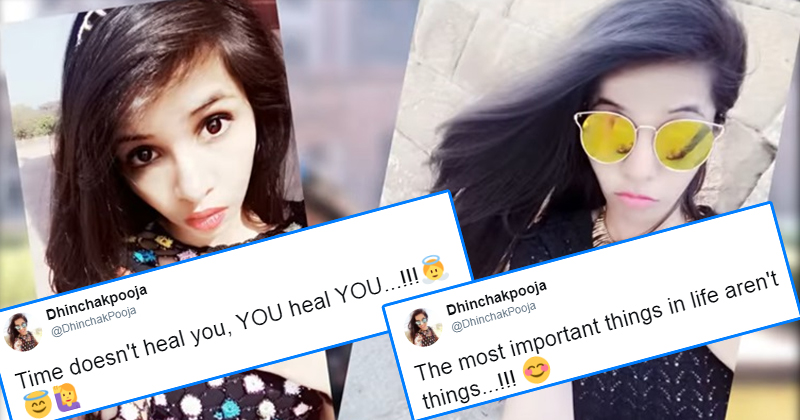 Love her or hate her but you just can’t ignore her. Yes, I’m talking about the awesome, the fabulous – The Dinchak Pooja. She’s been ruling the Internet in our country with her music, her latest hit being ‘Selfie Maine Leli Aaj’ which might possibly turn out to be the song of 2017, for us all.

She revived Cringe-Pop for all us who needed something new and much more entertaining than the usual Arijit Singh’s music that just doesn’t seem to stop now. Before the success of ‘Selfie Maine Leli Aaj’, Dhinchak pooja also had many other classic hits like ‘Swag Wali Topi’ and ‘Daaru’ to her name that had gone viral earlier. However, the recent success of ‘Selfie Maine Leli Aaj’ has just escalated her path towards the real deal. As per sources, Dhinchak Pooja is all set to release a brand new song soon, which might even be a much bigger success than her prior numbers.

However, there’s something more that demands your interest. If you haven’t yet started following Dhinchak Pooja on her other social media handles, then what the heck do you do with your life? Dhinchak Pooja updates her Twitter feed with some of the most inspirational quotes that would just make your day, week or even your month. Her Twitter has some of the most inspirational messages that might push you towards achieving your own dreams.

Here are some of the gems.

They can imitate you but they can’t duplicate you✌

The most important things in life aren’t things…!!!

Just because my path is different, doesn’t mean I m lost…!!! ✌

If it was easy, everyone would do it

Now, as this piece comes to an end, a lot of you will be thinking about the utter stupidity with which it was written or might even consume it while believing that it was covered under the garb of sarcasm. However, there’s something that I would like to throw a little shade, shadow or light, whatever may you consider it. Cringe Pop has been in existence for the longest time and this is definitely not the first one to surface the Internet.

You need to have a special kind of talent to go for your dreams and then share it the world. Grand Salute!