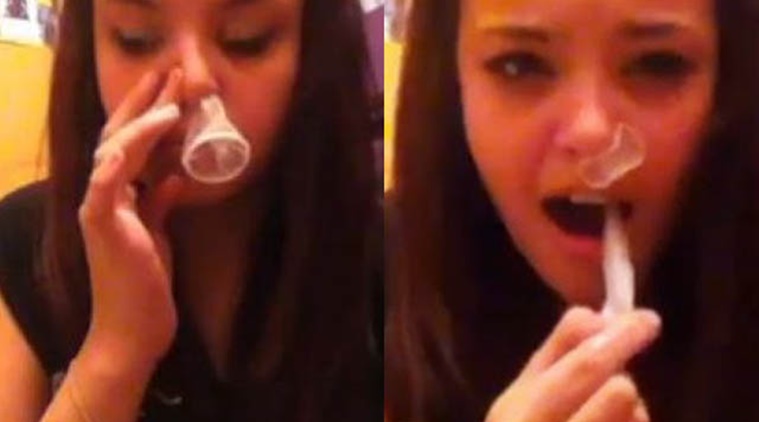 Social Media not only connects you with your friends and family but also pushes one to fall a victim to the need of validation from strangers. This is probably the sole reason why so many people have been doing some of the dumbest things possible in the hope of getting enough retweets, likes, and views on the things that they post on the Internet.

While for some it’s the need to be on the top of the number game, others just want to be a part of a weird clique.

An addition to the most life-risking and stupidest challenges has been recently made, and this time bunch of teens are snorting condoms. Yes, you read that right. Teens on social media have now felt that protection doesn’t only belong to your genitalia but also in your nose and out from your mouth. Heights of disgusting.

However, this is not the first time when something like the condom snorting challenge has reached the minds of the Internet generation. The first attempt to this bizarre challenge is said to be made in 2013, however, it’s resurfaced again and it’s dangerous than ever.

There are more people on the Internet today than ever before and this has caused the rise of hazardous challenges like these. More and more people are ready to try out dangerous challenges for likes, views and ultimately subscribers.

What does the condom snorting challenge consist of?

The challenge involves snorting an unwrapped condom up one of your nostrils and then pulling it out from the throat and eventually from your mouth. The idea to is to record it on camera and post the completed challenge on YouTube.

This condom snorting challenge has some dangerous implications on one’s health. It can not only get stuck in your nose or mouth, or in the passage between but can also cause some serious infections to one.

There have been previous attempts made in this challenge that has resulted in some of the most bizarre Emergency Room stories. In India, a 27-year-old woman once accidentally inhaled a condom through her nose and couldn’t get it out. This somehow ended up with a partially collapsed lung and for the next six months, the woman suffered from fever and cough.

Quite a few bizarre and life-threatening, and utterly stupid, challenges have surfaced on the Internet recently. But one has to admit that this might top all of them, along with some serious results in the end.