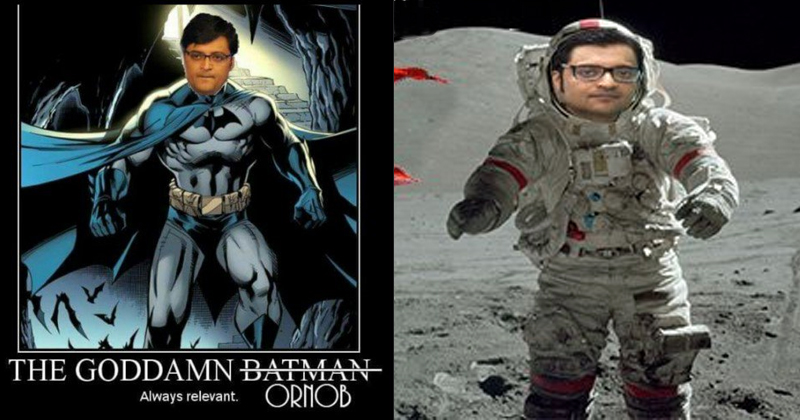 These are some of the hilarious memes that the Twitterati have made in relation to Arnab Goswami’s claims of being present during the 2002 Gujarat riots.

Arnab Goswami has always been in news, heck, he is the news, however, from the past few days, he’s been the news for all the wrong reasons. At least, Arnab would agree with us.

The Republic Editor and one of India’s loudest journalists recently revealed that while he was covering the horrific 2002 Gujarat riots, he was attacked by a mob near the state’s Chief Minister’s residence. Along with him, there were other journalists of his team and a driver. As soon as this claim break out, Rajdeep Sardesai, Arnab Goswami’s arch-rival, decided to take down Arnab with one tweet at a time.

This is the video where Arnab Goswami said that he was attacked by a mob in the 2002 Gujarat riots, however, the video has since been deleted from YouTube which tells a story of its own. However, someone posted it on their personal Twitter, so here it is.

In case you missed the video where Arnab Goswami was lying about Gujarat Riots… pic.twitter.com/UXvIqfBsaQ

In his tweet, Rajdeep explained that even though the story is correct, it was not Arnab’s incident, but rather his own and that Arnab wasn’t even covering the 2002 Gujarat riots. The experience has indeed been shared in Rajdeep Sardesai’s 2014 book – The Election That Changed India.

He even said that this particular “Fekugiri” by Arnab has made him feel sorry for his profession.

Fekugiri has its limits, but seeing this, I feel sorry for my profession. https://t.co/xOe7zY8rCp

Senior journalists Nalin Mehta and Sanjeev Singh, who also covered the 2002 Gujarat riots, came forward with their own tweets and said the same statement about Arnab.

Amazing: becos actually this incident happened with @sardesairajdeep in Guj riots. We know cos we were there @sanjeevrsingh https://t.co/HwHyl3Peqh

In order to control, the already huge fire, a Republic TV employee posted a picture with Arnab Goswami and Rajdeep Sardesai in the same frame and titled it, the crew of 2002 Gujarat riots.

TOI reported that the incident that Arnab narrated, which actually belonged to Rajdeep, happened in the first few days of the riots breaking out in Gujarat. Arnab briefly joined Rajdeep and the team at a later stage, when the picture was actually taken.

Since all the things came clear and Arnab Goswami didn’t have something to add up to it, in order to prove his innocence, Twitter is having the time of their lives. Already a part of Twitter conversations, Arnab Goswami has now become a meme on the Internet. People are posting pictures and texts of how Arnab was present at various important incidents in the history of our country, with the hashtag #ArnabDidIt. From being one of the first journalists to go to jail during the time of Emergency, to Arnab being the one who escorted the Britishers out of India.

All these hilarious tweets will leave you in splits and trust us, there’s nothing much better than this that you can come across today.

I still get goosebumps thinking about how Arnab stared down a tank in Tiananmen Square.

Arnob goswami was the first journalist who went to jail during emergency #ArnabDidIt@sanjayuvacha @sardesairajdeep https://t.co/ttgrdxXDae

All you people trending #ArnabDidIt are just jealous pseudo-liberal sickulerati anti-nationals. The man is a goddamn superhero, OK?
OK. pic.twitter.com/IQjildJqYH

At the stroke of midnight, when India was sleeping, Arnab was escorting British out of India.

It wasn't Jesus but Arnab Goswami who was crucified .#ArnabDidIt

But that's not a patch on how Arnab looked Gorbachev in his eyes and said, "Tear down this wall, Mister Gorbachev!" #ArnabDidIt https://t.co/ieNC6hU5BH

+ or when #ArnabDidIt against QPR at 93:20 to win the Premier League for ManCity in 2012 and the commentator went "ArnabGooooooooooo!"

+ or, when he said "HOW DARE YOU call this 1 small step?! This is 1 GIANT LEAP I WILL NOT LET YOU SPEAK!" after landing the Moon #ArnabDidIt

+or, when Kohli carried Arnab on his shoulders @ Wankhede saying "Arnab-paaji has carried the weight of the nation for 20 years" #ArnabDidIt

+ or, when Arnab told Steve Jobs in 2005, "Wake up and smell the coffee Mr. Jobs! Feature phones are dead! Touch is the future!" #ArnabDidIt

Do you guys remember when Arnab Goswami time travelled & fought for India's freedom struggle? What a glorious fighter#LalSalaam #ArnabDidIt

The Nation is dying to know where Arnab Goswami is now and whether or not he would come out to support his statement to this country.