Home Trending To Counter Walmart, An Ambani-Jeff Bezos Deal Seems To Be In The... 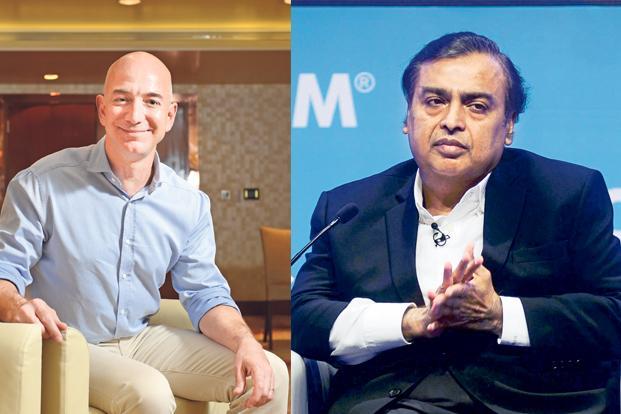 It seems that the mega American retailer Walmart is a bit hard to contest against and stand up to. After all, the scale at which Walmart operates is said to be iconic. Wondering what is it?

Apparently, the mega American brand operates more than 11,200 stores under 55 banners and in around 27 countries in the globe. If this isn’t a large-scale business to counter, then one wonders what is?

And maybe that is why there seems to be, according to confirmed sources, an enterprising Ambani-Jeff Bezos deal in the pipeline. So this Ambani-Jeff Bezos deal basically means that it is going to bring two iconic business moguls together, both of whom happen to be on an eminent list of world’s most iconic, successful billionaires.

But talks of something major happening on the sidelines brings us to the next most important question. Just what is the Ambani-Jeff Bezos alliance about?

Apparently, Amazon.com Inc is currently in talks with Reliance Industries’ retail unit to buy a stake in India’s biggest brick-and-mortar retailer. But how does this precarious business relationship pan out, one wonders?

To that end, this is what one needs to know.

Amazon’s huge online presence will enable Reliance’s private and consumer labels business experience rich and sudden growth. This potential partnership, one for the future, will help the two mega brands jointly counter the irrepressible Walmart, a firm that had invested a huge $16 billion in Flipkart as of the last year.

But where the market sources stand, then it’s Amazon which approached Reliance for this possible alliance but as of yet, it’s not clear whether the deal would materialize.

But all that said, thus far, none of the two brands have been able to confirm any of these updates or rumored developments. While Amazon wasn’t available for comment, Reliance said that any disclosures would be informed to the stock exchanges.

In addition, it is worthwhile to note that what attracts Amazon to India is its growing, dynamic e-commerce market. In fact, earlier, if there was a company that ‘seemed’ interested in getting a stake in Reliance Retail, then it was PRC’s (People’s Republic of China) Alibaba.

To conclude, here is what NDTV’s assessment of the current business talk.

Reliance could potentially leverage Amazon’s global experience in technology, supply chain and logistics as it aims to connect grocery stores across the country digitally through its Jio telecoms network.

For Amazon, picking up a stake in a Reliance unit could mean getting access to the Jio telecoms platform and its vast retail footprint of more than 10,600 stores across India. It might also add more firepower to their lobbying efforts, as the Ambani family is viewed as being well-connected politically.

That said, what is important is to note what drastic change might this business-arrangement bring both companies, two of the biggest names floating around in the world today.