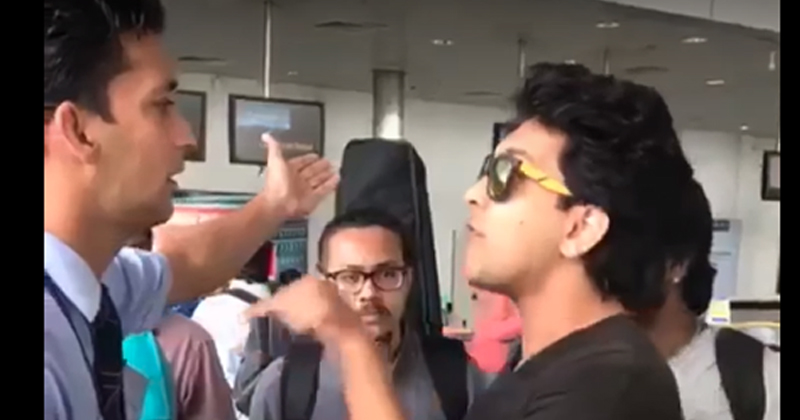 How many times have we seen celebrities or anyone remotely in connection with some power, completely misusing it to fill their own interests? Too many times to actually recall, right? Every now and then, we’re served with stories where celebrities, political figures and who not, decide to make the utmost use of their status while being disrespectful toward others.

The recent case of Aditya Narayan is just one of many who have successfully managed to create chaos on public places just because they’re not treated with a celebrity status.

Singer Udit Narayan’s son Aditya Narayan who is a singer and anchor on Zee TV’s ‘Sa, Re, Ga, Ma, Pa’, was recently in Raipur for an event. While coming back to Mumbai, Narayan was caught under an altercation with the airport security staff in which he abused and threatened them.

The video from the incident went viral on the Internet, where the singer can be seen threatening the security. All in the name of – Aditya Narayan and the alleged powers that he might have.

Check out the video:

Hindustan Times released the airline’s official statement about the incident. As per the statement, Aditya Narayan was carrying excess baggage of 40 kg. He had to pay Rs 13,000 for the excess baggage, however, Narayan refused to pay even a penny more than Rs 10,000 to the female check-in staff and started making a video in which he hurled abuses. Later, the Deputy Manager came and asked Narayan to be civil and not use such language. And, then Narayan started shouting even louder and even threatened the manager.

As soon as the video of the incident went viral, many came to react to it and Narayan over his behaviour. Here are the reactions:

Serious question. Who is Aditya Narayan?

Hello @jayantsinha and @Ashok_Gajapathi : good news for you both. You now have a civilian ADITYA NARAYAN to put on your No-Fly list. @IndiGo6E

I condemn #AdityaNarayan'S behaviour with staff of @IndiGo6E at Raipur. With success comes humility & not arrogance.He should apologise.

The real excess baggage here is that of privilege. #AdityaNarayan

This is not the first time #Adityanarayan has misbehaved with someone. Ask him how he reacted when his principal questioned his attendance

Aditya Narayan wants to remove ppl’s underwear for a small thing. Doesn’t he know that Bollywood ppl do that only in private?

Who on earth is Aditya Narayan to flash a VVIP card? Hosting some stupid reality shows doesn't make anybody VIP

I remember him being suspended from college for a week because of misbehavior with security guards.
Old habits die hard.#AdityaNarayan

The airline since then has announced that Aditya Narayan later apologised to the ground staff, after which he was given the boarding cards.

However, something like this is not new. The recent came of MP Ravindra Gaikwad was a huge controversy in the country. Plus, the effective steps taken by the airlines were the right answer to all the allegations and threatening Gaikwad gave in the name of his profile.