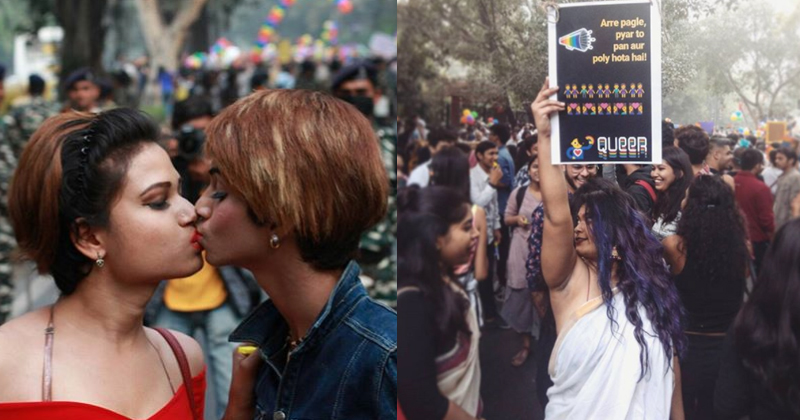 2017 is on the edge of its end and we still judge people for their choices. Especially those who fall under LGBTIQA community. While many people have already accepted them as normal human beings, there are some who tend to think of LGBTIQA members as a black spot in society.

To all the people who belong to latter mindset, here is the thing, live and let live, because honestly, your sick, and narrow minds have no power over another person’s individuality. As much as you love your freedom, these people are human too and they are free to choose their sexual orientation.

However, whether you want it or not LGBTIQA members are an inevitable part of the world and the best thing about them is, irrespective of the insult, questions, and moral obligations, they are proud of who they are.

Yes, and that’s inspiring. On Sunday, Delhi celebrated the 10th Queer Pride Parade and it was an extravaganza where the people of LGBTIQA community embraced their spirit of being who they are. The celebration march was carried out from Barakhamba metro station to Jantar Mantar, where people were swaddled in various rainbow colors.

Regardless of their religion, caste, age, and gender, all of them were wearing a beaming smile on their face. Hurling flags, balloons, costumes and placards, many gathered to ask about their rights to live freely according to their desires.

The whole parade was so vibrant that it looked like a festival. These pictures not only capture the essence of their brave hearts but also exhibits the colors of their happiness.

1. The Flag Represents Their Life!

3. Ahem, At Least A Transparent Display Of Affection!

5. Rather Than Doing A Protest, They Chose To Say It Out Creatively!

8. Delhi Streets Were Oozing With Supporters!

12. Placards Were Gaining A Lot More Eyes Than People.

13. Mr. Tharoor, The Answer Is Awaiting!

It was indeed a sight to behold. All these people have a right to embrace their sexuality. We just hope people grow up and understand that they cannot dictate someone to live their life. We hope that these people get more and more support in coming years.

We hope, we make a society where everyone has equal rights despite their sexual preferences.

And at last, we hope all these wishes come true.