Everyone has heard of the Seven Wonders of the World. But do you also know that along with the man-made wonders of the ancient world and modern times, there are the seven natural wonders as well? They are created and maintained by mother nature. Let’s find out more about the 7 Natural Wonders Of The World.

These are the 7 natural wonders of The World

The first of the seven wonders of nature is the Amazon rainforest. The world’s water-richest river, which leads through the largest and most bio-diverse rainforest, forms the basis of life for the people in the area. It is the largest rainforest on earth with an area of 5.5 million square kilometres.

Originating in the Peruvian Andes, the extensive river system with up to 100,000 tributaries flows through 9 South American countries into the Atlantic. At the same time, it is one of the most important traffic routes in South America and contains 20% of the world’s freshwater.

Impressive waterfalls, pink Amazon dolphins and the Pororoca tidal wave are just a few of the highlights of this natural wonder.

Ha Long Bay in Vietnam – 7 Natural Wonders of The World

Halong Bay runs 120 km along the coastline in the north of Vietnam, extends over a total area of 1,550 km² and is located in the Gulf of Tonkin with 1,969 huge limestone cliffs. Some of these rocks rise several hundred meters.

The name Vinh Ha Long means something like ‘The Bay of the submerged dragon‘. Legend has it that the bay was originally created by a dragon who lived near the sea in the mountains.

In addition to the limestone cliffs that are one of the most popular tourist attractions in Vietnam, the visitors can expect to see countless caves, some of which can only be entered at low tide.

Iguazú waterfalls in Argentina and Brazil

You will find the Iguazu waterfalls right on the border between Argentina and Brazil, surrounded by subtropical rainforest. They are among the largest waterfalls in the world and, over a length of 2.7 kilometres, consist of 20 large and 255 smaller waterfalls separated by islands.

Iguazu can be translated as ‘Big Water‘. The water masses patter down from a height of 82 meters and attract countless visitors to both countries every year.

According to the history of the Guarani, the god Boi, out of anger, cut a gorge into a river bed, which gave rise to the impressive natural spectacle.

Suggested Read: Different Country Different Manners – Don’t Do this in these Countries

The volcanic island created 1.5 million years ago is South Korea’s largest island. It is located around 85 kilometres from the mainland. In addition to the volcanic rock and the earth made of volcanic ash, the highlight is the 1,950 meters high and extinct Hallasan volcano, which is also the largest mountain in South Korea.

Cut off from the outside world 100 years ago, today many visitors come to marvel at the wonder of nature. You can also explore the volcano from the inside and experience the sunrise on the summit.

The strictly regulated Komodo National Park belongs to the Sunda Islands and offers a unique ecosystem at an altitude of up to 1,085 meters. To the east of Bali and Lombok in Indonesia is the island of Komodo, which is known primarily for the Komodo dragons.

This unique and up to 70 kg heavy lizard species lives only on a few of the Sunda Islands and gives Komodo its name. Many tourists also come to the island to dive and explore flora and fauna underwater, which is unique. The island is also famous for its Pink Beach; the name says it all.

Table Mountain, which is Cape Town’s landmark, is also one of the most visited attractions in South Africa. They were created around 430 million years ago.

The mountain offers not only a beautiful view of the city but also a unique microclimate with around 1,400 plant species. The mountain is 1,087 meters high and is spread over a total area of 6,500 hectares.

It is almost flat due to wind and water erosions. If you don’t want to use one of the many hiking trails to get to the mountain, there is a cable car to the summit, installed since 1929.

Suggested Read: The Top 10 Cheapest Cities In The World.

Puerto Princesa Subterranean River National Park is located on the island of Palawan in the Philippines. The main attraction of the park is the 7 km long Sabang underground river, which visitors can explore by boat.

The river flows under the St. Paul mountain, which is 1,027 meters high and then into the South China Sea. In addition, the impressive cave systems with unique animal and plant species attract visitors to the national park.

You might already be captivated by the 7 Natural Wonders Of The World, just by looking at the pictures and descriptions. You might need to plan ahead to ensure safe and enjoyable travel to these places. 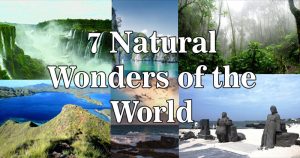 Natural Wonders of the World