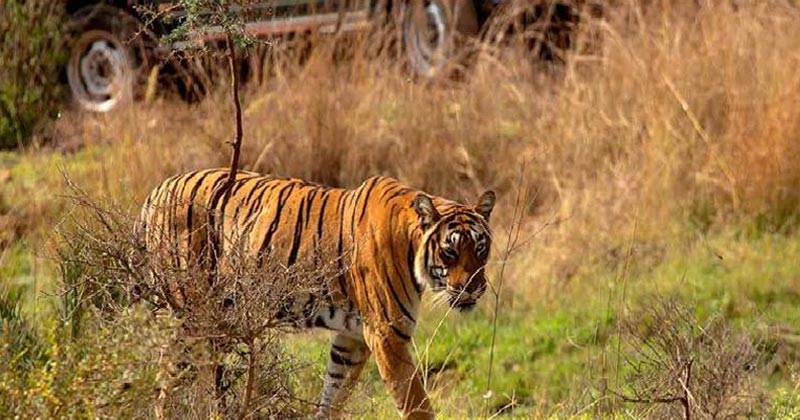 West Bengal is a place known for its nostalgic and quaint charm. The state, however, is also a haven for wildlife lovers. While wildlife reserves in the north and central India are more renowned all over the country, West Bengal too has some truly spectacular wildlife places to offer that aren’t that world renowned. Here is a look at some of the best national parks in West Bengal which are a must visit.

This isn’t just the most popular national park in West Bengal; it is one of the most renowned wildlife sanctuaries in the world. Home to the Bengal tiger, the Sundarban National Park is a mysterious and enchanting place that has captivated wildlife lovers and researchers for decades. These mangrove forests cannot be accessed on foot and one would need a boat ride to explore the rich flora and fauna here. Other than the Bengal Tiger, Sundarbans is also host to Estuarine the Crocodile (Crocodilus porosus), the Fishing Cat (Felis viverrina), the Common otter (Lutra lutra), the Water Monitor lizard (Varanus salvator), and Gangetic Dolphin (Platinista gangetica), among a host of other magnificent animals.

One of the most picturesque national parks in the country, the Jaldapara Wildlife Sanctuary is located at the foothills of the Eastern Himalayas in the Alipurduar District of northern West Bengal. The forest is situated on the banks of the Torsa River and is known for housing the one-horned Indian rhino. In fact, Jaldapara has the largest population of the Indian rhino after Kaziranga National Park in Assam. The forest is rich with verdant beauty and has an array of animals in its confines like the Indian leopard, Indian hog deer, the Muntjac and some great variety of birds.

Neora Valley National Park – One of the lesser-known national parks in West Bengal:

One of the lesser-known national parks in West Bengal is the Neora Valley National Park. Located in the Kalimpong district of West Bengal this is a breathtaking site and a perfect weekend getaway for adventure addicts. While the forest spreads over an area of just 88 sq. km, it is teeming with a luxurious growth of forest cover and streams that makes it difficult to access the place on a vehicle. Being situated in a hilly terrain, many parts of the national park are inaccessible by foot. However, that makes it a perfect sport for trekking enthusiasts who can navigate through the dense and exotic forest and gape at the incredible variety of flora and fauna. One of the most famous occupants of the Neora Valley National Park is the endangered and exquisite Red Panda. Neora Valley is a haven for bird lovers too as it has some truly splendid varieties like Hodgson’s Hawk Cuckoo, Jerdon’s Baza, Bay Woodpecker, Golden-throated Barbet, and many more. The park has a diverse variety of trees in bamboo, oak, ferns, sal, among others.

Located in the Assam-Bhutan border, the Buxa Tiger Reserve is spread over a whopping 759 sq. km area and has plenty of wild attractions and natural beauty to cockle the hearts of wildlife lovers. While the park has ‘Tiger’ in its name, the animal is pretty elusive to find in Buxa and sightings of tigers are rare. What you are certain to set sights on, however, are the elephant, the Indian bison, the leopard, and several species of deer. Apart from these, you will also find some great reptiles and smaller mammals. Buxa is also rich in myriad varieties of rare orchids and medicinal plants. The Buxa National Park is situated on a rough terrain and traveling on car isn’t easy but is worth the effort. The park got the status of a tiger reserve in 1983 and was declared a national park in 1992.

While the Gorumara National Park isn’t huge – it’s spread over 80 sq.kms only – it is scenic and teeming with great wildlife attractions. Located in the Jalpaiguri district of West Bengal, the Gorumara National Park is known for having one of the world’s most exotic birds – the Great Indian Hornbill. You are likely to find this majestic bird flying around a tree on your visit to this beautiful forest reserve. Other attractions in this park include the Asiatic one-horned rhino, the Asian elephants and even the royal Bengal tigers. Gorumara also has a fine collection of mammals, reptiles, insects and birds – the cobra, the python, and the woodpeckers being the more famous ones. Since the park is nestled on the foothills of Great Himalayan Mountains, it has a diverse and abundant variety of flora and fauna and is extremely vivid and charming.