Home Travel Most Haunted Places In West Bengal – A look at the spookiest... 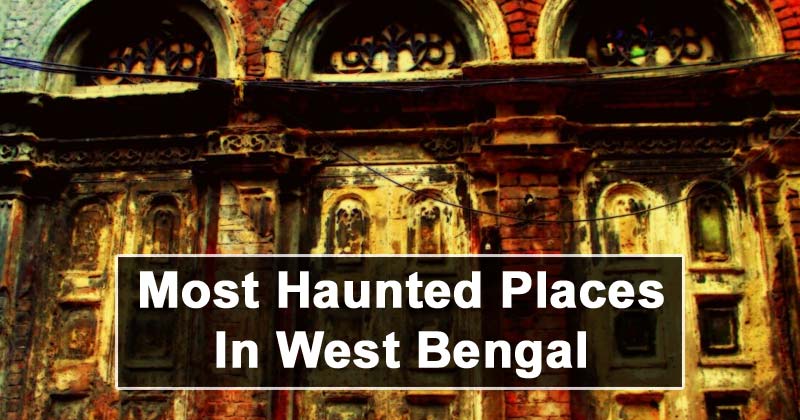 West Bengal is celebrated for its several facets – old world nostalgia, grand festivals, great food, delightful sweets, and an easygoing way of life, among the most notable ones. However, lying underneath the charm and beauty there is also some uncomfortable eeriness at certain places here that chills the bone out of the people living there. You might not believe in ghosts or the paranormal – and certainly not when you are in a charming place like West Bengal. But once you can lift that veil of enchantment, you will find that some of the most renowned places here are, in fact, the most haunted places in West Bengal.

Take a deeper look at some of the spookiest locations from the state of West Bengal.

The Writers’ Building has been the office of many renowned politicians from West Bengal. But do you know that it also infamous for being haunted? Rumors of some spine-chilling happenings have emerged from the spooky halls of this giant building – womanish giggles and blood-curdling screams emanating out of the many corners of the 300-year-old building late at night.  Perhaps they might be only rumors. But the structure of the Writers’ Building itself gives it a very ancient-like feel and night strolling through its halls is likely to be an unnerving experience. Those who have spent long years inside this historical building have often said that some of the vacant rooms in the vast building holds some eerie secrets.  And thus, those spooky screams at night might not be rumors, after all.

2. Putulbari – The House of Dolls

The name and the location of this place is almost perfect for a classic Bollywood horror film. The name ‘Putulbari’ literally translates to ‘Hose of Dolls’ and it his home to a family called the ‘Natta family‘ – generations of which have been famous for performing musical presentations . Located near the Sovabazar jetty in Kolkata, the massive yet ancient building’s edifice is reminiscent of a classic Roman structure which, while elegant to look at from the outside, can be pretty eerie at night.

The halls of the Putulbari, however, contain some dark secrets too. It is rumored that in the days of the yore, wealthy babus often sexually exploited women in this building at night. Many from around the area are of the belief that the spirits of those abused women haunt the Putulbari. After midnight, creepy noises of anklets, bangles and cackling female laughter can often be heard at the Putulbari giving people in the vicinity quite the scare.

The Kolkata metro is the lifeline of the city and is used regularly by hordes of people every day. Not many would think that such a busy mode of transport could have anything to do with ghosts. But one particular metro station in Kolkata has become notoriously kno0wn for being haunted.

Rabindar Sarobar, a busy station in South Kolkata, has on several instances, reported some eerie incidents. The metro drivers and the last passengers, who have got off at the Rabindra Sorobar station after 9.30 PM, have claimed to see some sinister figures floating about near the tracks.  Initially, these reports were rubbished as rumors. But when claims like these by passengers became more regular people have begun to avoid the Rabindra Sarobar metro station at night nowadays. Who knows, after all, what lurks in the passageway of th station after dark?

The National Library is one of the most acclaimed places of Kolkata and was, at a time, literally like a temple for book lovers across the state. Over the years, though, the landmark site has earned a reputation for being spooky as well. This massive building has countless rooms and alleys and at night it can be outright overwhelming for anyone to be walking through them.

In the past few years, creepy noises of footsteps approaching from the dark hallways along with strange whispers have often been heard after the dark. While this may appear to be scenes from a horror movie, many people who have visited the place have affirmed the rumors. Some librarians, too, have shared stories of how they have felt their chairs being pulled all of a sudden and books being dropped at different corners of the library at times. Perhaps they were mere coincidences. But this huge library is so silent at night, that you are likely to be a little freaked out after hearing these stories. Are you willing to a take a risk of a nighttime stroll in this library?

5. Under the Howrah Bridge

The Howrah Bridge is a landmark and historical location of West Bengal and is known all over the country for its grandiose beauty. You will be surprised to know, however, that the Howrah Bridge too is considered one of the most haunted places in West Bengal.

Underneath the Howrah Bridge, there is a bank – close to the Mullick Ghat flower market and Zenana Bathing Ghat. This ‘ghat’ has been witness to many unsavory incidents of drowning and suicides over the years. It is believed that those unfortunate happenings have left their imprint on the place. Wrestlers and other people who frequent the spot have reported to seeing some hands thrashing about above the waters near the banks in the wee hours of the morning; sometimes accompanied by a distant wailing. Most people now avoid being under the Howrah Bridge late at night or early in the morning. You can never be too safe, isn’t it?

6. Dow Hill Of Kurseong – the king of Haunted places in West Bengal

The setting of the Dow Hill of Kurseong is perfect for the creepiest scary movie – hounding woods, creepy hills and even a supposedly haunted school. The place is slowly earning its name as one of the most haunted places in India. Located near the hill station of Darjeeling, Kurseong is a sleepy and quaint little hill town that attracts tourists for its charm and beauty. However, as the sun goes down, the place acquires a vibe of eeriness.

There is a little stretch of road in between the Dow hill road and the Forest office in Kurseong which is also called the ‘Death Road’. Woodcutters there have often reported to seeing the spine-chilling form of a headless boy floating about near the woods and drifting deep inside. People who have ventured deep into the forest have also complained of getting an uncomfortable feeling of being watched or followed and hearing blood-curdling screams from inside. The locals of Dow Hill have plenty of paranormal stories to chill your bones with; including hearing ghostly whispers coming from the local school at night. Hence most people stay away from venturing out at night while at Dow Hill. And rightly so.

Perhaps this is the most obvious choice in the list of haunted places in West Bengal. It is, after all, a crematorium.

Burning ghats are, by essence, creepy and sinister. The healthy dose of horror film scenes shot in crematoriums hasn’t helped that cause. The Nimtala Crematorium in Kolkata is known to be an infamously haunted place. One perhaps need not explain why. Aside from the obvious, it has been said that deep within its confines the Nimtala Crematorium has aghoris (ascetic Shaiva sadhus) who gorge on human flesh and blood and chant to Shamshaan Kali (a form of Goddess Kali) to try and summon her. The place gives off an ominous aura and even people walking near the borders of the crematorium at nights are said to shudder a little as they get close.