Top 10 Zoos in India One Should Keep Them in Their Bucket List!!

India is a land of diverse habitats exhibiting its flora and fauna in 164 zoos. The zoos are spread all over the country showcasing their richness with respect to animals and wildlife. All zoos are WAZA (World Association of Zoos and Aquariums) approved. We have compiled a list of the top 10 zoos in India for you…

The “First Zoo in India” Thiruvananthapuram Zoo offers a memorable experience of the woodlands, lakes and backwaters. The Thiruvananthapuram Zoological Park was established in 1859 as an annex to the Napier Museum. It is home to 82 species from around the world including royal tigers, panthers, deer, boar etc.

The Mysore Zoo, Sri Chamarajendra Zoological Gardens, in the list of the top 10 zoos in India it is the oldest zoo in Indian history. It is one of the most popular Zoos in India because of its diverse fauna. It has ten elephants, much more than any other zoo in India. It is also home for African elephants. Other species include Swan, American White Pelican, Giraffes, Zebras and Hamadryas baboon.

The Nandankanan Zoological Park, Bhubaneswar, Odisha has international fame for its exotic white tigers. Other rare species include Manipuri Deer, Hippopotamus and Wild Ass. Tourists are greatly fascinated by its Lion safari Tours. It is one of the three zoos of India with Green-winged Macaws, Cinereous Vulture and Nicobar Pigeon.

The Alipore Zoological Gardens, Kolkata is one of the oldest zoos in India. The zoo is known for animal species including giraffes, rhinos, nilgai, etc. It was home for the famous “Aldabra Giant Tortoise Adwaita” who lived for over 250 years and died in 2006. Red Kangaroo, Giant Squirrel, Dromedary camel, Royal Bengal Tiger and Great Indian One-horned Rhinoceros are some of the crowd-pulling fauna. 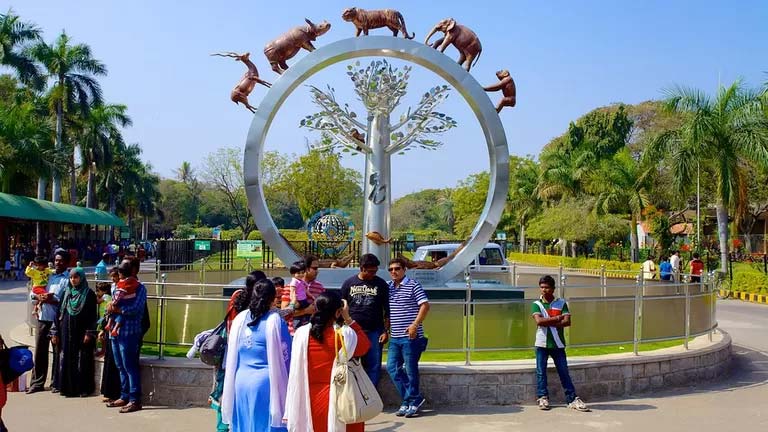 In the list of top 10 zoos in India the Nehru Zoological Park, Hyderabad has also included, the name of this zoo was named after the first prime minister of the country, Pandit Jawaharlal Nehru. The zoo has the historic 200 year old Mir Alam Tank bund. It is the World’s first multi-arch masonry dams. The semi-circular arches add to the beauty of the majestic lake. Amidst numerous species of birds, animals, reptiles and fishes, rare white-backed vultures are a stunning attraction.

The Junagadh Zoo, also known as Sakkarbaug Zoological Garden is the oldest zoo in the state of Gujarat. The Zoo is responsibly taking the task to reserve the rare species of Asiatic Lion under the ‘Endangered Species Captive Breeding program’. This makes it the largest breeding center in the country.

Indira Gandhi Zoological Park, Visakhapatnam is surrounded by the scenic beauty of Eastern Ghats. It has a well-planned layout with a jungle and water body inside the Zoo park. The zoo is divided into sections where primates, carnivores, lesser carnivores, small mammals, reptiles, ungulates and birds stay in natural caged surroundings.

Also Read – Animal Records – The Kings of the Animal Kingdom

The capital of India has its Delhi National Zoological Park situated near the Old Fort. The zoo attracts tourists from all over the world to enjoy its more than 2000 species of animals and birds. The Delhi zoo is renowned for its rare Manipur Brow-antlered deer. Other profound species are white tiger, hillock, gibbon and white buck.

In India, zoos were providing a naturalistic environment for the animals’ well-being. Junagadh Zoo is known for its preservation of the endangered Asiatic Lion. These Zoological Parks are committed to protect the animals in captivity. Let’s awaken to the financial sustainability of these ‘heavenly abode’ for the rich fauna!