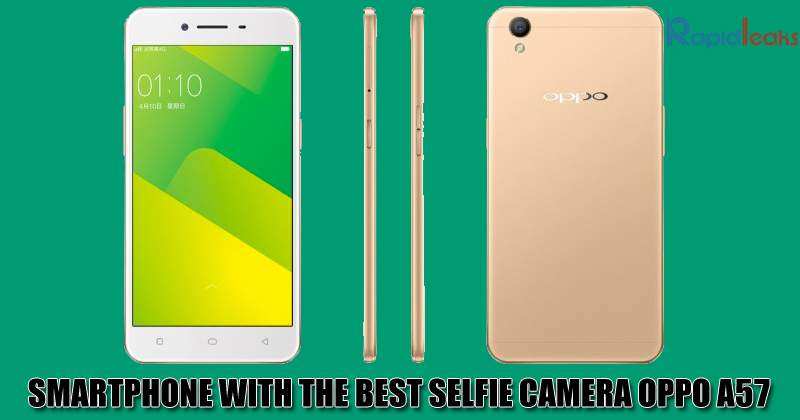 Oppo A57 has been launched in India with the starting price of Rs 14990 and this entry level, selfie focused device is expected to turn the tables for Oppo in the mid-budget smartphone category.

Oppo has been progressively coming up with a new offering in the India and since its debut in the second largest smartphone market, we have seen a lieu of mid-budget, performance oriented and camera-centric devices that have been marked as the best allrounders in the industry.

Oppo A57 is just another ace from the company’s backpack and due to the increased demand for 16 MP front cameras, Oppo has taken the first movers advantage. The fact that, when it comes to camera-centric budgeted smartphones, Oppo always had an upper hand on its competitors like Xiaomi, Lenovo, and even Motorola, the new entrant will definitely escalate the competition in the sub-Rs 15,000 category. Oppo A57’s specs look promising and let’s see what the device is capable of in real conditions.

The 5.2-inch (720 x 1280 pixels) HD LCD display having a pixel density of 282 pixels per inch, with 2.5D curved glass will have good viewing angles and just like its predecessors, the pixel and graphic density will also be at par with the competition. The home button will work as a fingerprint scanner, having a lock /unlock speed of 0.8 seconds.

Oppo A57 is powered by a 1.4 GHz Octa-core Qualcomm Snapdragon 435 processor with 3GB of RAM. This means that the smartphone is capable of running smoothly, making multitasking as easy as flicking a wand. Adreno 505 GPU for graphics and 32GB of internal storage, expandable up to 128GB will further make your gaming experience creamy, with no frame drops.

The one ‘not so good’ thing about Oppo A57 is the Android 6.0.1 Marshmallow. While smartphones in this category are offering Android Nougat or at least an update in the future, Oppo has remained silent on this issue.

“If you want some, come and get some”, that’s what Appo A57 will say to its competitors in this department. After seeing a huge demand for Oppo F1S’ camera in the budget segment the Chinese smartphone maker has launched Oppo A57 with a 13-megapixel rear camera sensor having, aperture of f/2.2, PDAF, along with a LED flash module. Up front, it houses a 16-megapixel shooter with f/2.0 aperture, the father of all budgeted cameras.

Oppo’s beautify 4.0 software for visual enhancements and several other features including the option for blurring the background and palm shutter, that takes a picture after you hold your hand in front, makes Oppo A57 the best camera-centric smartphone in the mid-budget category.

The 2900 mAh battery in Oppo A57 is something unexpected and a 3500 mAh bank could have been a better option. Considering the competition flaunting mostly 4000 mAh batteries, the new entrant may not see the kind of success it deserves.

Oppo A57 is available through both offline and online retail channels, including Amazon, Flipkart, and Snapdeal.