Samsung Galaxy S8 Active, as per the company, has passed military specification testing and is focused toward users in environments like extreme outdoor sporting events as well as construction sites, where a standard smartphone might succumb to wear and tear.

Interestingly, the launch of Samsung Galaxy S8 Active comes just weeks ahead the planned debut of the company’s next flagship device which is expected to be called the Samsung Galaxy Note 8. The latter would mark the first redesign to the Note series since the Note 7 battery debacle last year.

Coming back to the Samsung Galaxy S8 Active, it comes with almost similar specifications as that of Galaxy S8, while the biggest difference is in battery capacity which has been increased to 4000 mAh coupled with fast-charging support as compared to Galaxy S8’s 3,000 mAh battery.

The other biggest change in the Samsung Galaxy S8 Active is that it doesn’t come with a curved screen anymore, which we were expecting due to the rugged nature of the smartphone, in order to increase the durability. The Samsung Galaxy S8 Active has a shatterproof display which can withstand a drop from up to 5 feet onto a flat surface, dust and water-resistant rating, a metal frame and bumper to protect against abrasion, shocks, tilting or twisting.

Instead of a thin glass, the back cover now has a rugged, tough texture for a secure grip and Samsung Galaxy S8 Active is rated to withstand immersion in up to 5 feet of water for a period of 30 minutes.

AT&T Next has also launched a slew of offers alongside to lure more customers and a buyer gets the option to get $500 (Rs. 31,800 approx) towards a Samsung TV purchased online with the purchase of Samsung Galaxy S8 Active. The offer is also valid via DIRECTV.

And last but not the least, the purchase of Samsung Galaxy S8 Active can get the buyers up to $200 (Rs 12,700 approx) in credits if they trade in an eligible smartphone in exchange.

As for the Indian market, with the launch of robust devices like Cat S60, it is possible that Samsung may finally want to consider releasing the Active series in India. 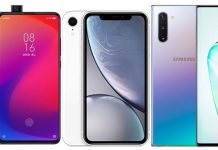