Samsung Galaxy A9 launched in India: 5 features that make it a perfect OnePlus 6T competitor

Samsung Galaxy A9 has been all over the news these days for being the world’s first smartphone with a quad camera setup at the rear and now, as the Samsung Galaxy A9 makes its way to India, expectations are really high from the handset as it is the perfect example of how Samsung wants to take the mid-range segment forward in the country. For the unknown, the Samsung Galaxy A7 was also launched in India last month and while it sported a triple rear camera setup, the Galaxy A9 aesthetically similar to the A7 apart from the added camera sensor, especially in regards to the design.

However, there is much more to the Samsung Galaxy A9 as it has been launched in direct competition to the segment leader OnePlus 6T in the mid-range premium smartphone segment and during the product launch, Samsung specifically mentioned that their next offering isn’t just a camera smartphone but it has indeed been developed keeping in mind everything that millennials would want from a well packaged smartphone.

Talking about the highlights, the Samsung Galaxy A9 comes with a main 24-megapixel rear camera sensor with f/1.7 aperture while the other three sensors in the quad camera setup include a 10-megapixel Telephoto lens coupled with f/2.4 aperture for 2x optical zoom, an 8-megapixel 120-degree Ultra Wide Lens in order to offer wide-angle pictures and the 5-megapixel depth for perfect portrait shots. At the front, selfie-taking duties are taken care by the 24-megapixel camera coupled with f/2.0 aperture. There is also an LED flash with the rear-camera module. 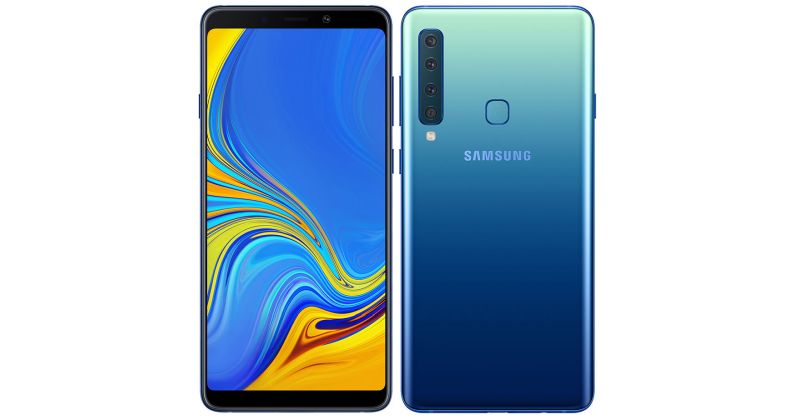 Moreover, a Super AMOLED display, a huge battery backup, and an efficient processor have also been added to make Samsung Galaxy A9 a well-packaged smartphones and here, we are going to take a look at the five best Samsung Galaxy A9 features which will help the world’s first smartphone with a quad camera setup to compete with the formidable OnePlus 6T in India. However, let’s take a look at the specs sheet first

Samsung Galaxy A9 price and availability

The Samsung Galaxy A9 price in India starts at Rs. 36,990 for the 6GB RAM version while the 8GB RAM version of the handset is priced at Rs. 39,990. Samsung has announced that the Galaxy A9 has been made available for pre-booking via Flipkart, Amazon, Paytm and Samsung’s online store while it can also be booked via offline channels such as Samsung’s official stores as well as offline partners. The Samsung Galaxy A9 will be available in Bubblegum Pink, Caviar Black and Lemonade Blue colour options.

While the smartphone will go on sale in India starting from November 28 as part of the launch offers, all buyers will get Rs. 3000 cashback on orders made through HDFC Debit and Credit cards.

Samsung Galaxy A9 launched in India: 5 features that make it a perfect OnePlus 6T competitor

For obvious reasons, the quad camera setup is the biggest trump card for Samsung Galaxy A9 as it comes with bumped hardware instead of some software gimmicks. While the main 24-megapixel rear camera sensor with f/1.7 aperture will capture details in the pictures, the 0-megapixel Telephoto lens coupled with f/2.4 aperture will offer 2x optical zoom. There is a third 8-megapixel 120-degree Ultra Wide Lens in order to offer wide-angle pictures and squeeze a whole landscape into one single picture while the 5-megapixel depth for perfect portrait shots will offer perfect balance when edging out the subject from the background. At the front, selfie-taking duties are taken care by the 24-megapixel camera.

The 3800mAh in-built battery with adaptive fast charging support will easily offer a full day worth of juice even if you use the Samsung Galaxy A9 for extended multimedia consumption, a couple of hours of heavy gaming and all daily tasks that a smartphone can be used for. Moreover, the adaptive fast charging support will also help the device learn your charging habits in order to offer the fastest charge possible when you are in a hurry. In comparison, the OnePlus 6T comes with a 3,700mAh battery with dash charging support.

These days smartphones have been used extensively for an immersive multimedia experience, especially for watching videos and the 6.3-inch Full HD+ Super AMOLED Infinity display can offer a lot of details, ample amount of colours as well as contract along with great viewing angles for the users. This means that irrespective of the fact that you are streaming a high-quality video or playing a graphics-hungry game, the Samsung Galaxy A9 will never let you down.

These days, a dedicated microSD card slot has become one of the key specs in the budget smartphone segment as manufacturers find it hard to offer more inbuilt storage due to budget constraints. However, the Samsung Galaxy A9 has brought this nifty feature to the mid-range segment with a triple SIM tray, which means that you can use two nano SIM cards along with a microSD card at the same time. While this ends the constant worry of choosing between either an extra cellular connection or expandable storage, the Samsung Galaxy A9 can support up to 512GB of expandable storage via microSD. For the unknown, the OnePlus 6T doesn’t support expandable storage.

However, in order to price the Samsung Galaxy A9 competitively in the segment and also keeping it away from its own flagship smartphones, Samsung has decided to go with the Snapdragon 660 SoC, which is still one of the most powerful mid-range processors in the world. Be it playing PUBG Mobile, multitasking with heavy apps or quick app loading times, the Samsung Galaxy A9 has enough to offer, if not the best in the segment.

At the same time, the deficiency in the performance department along with a less sturdy build quality of the Samsung Galaxy A9 can be made up with the camera capabilities. However, when it comes to choosing one out of the Galaxy A9 and OnePlus 6T, it still depends on what you are looking to do with your next premium smartphone.