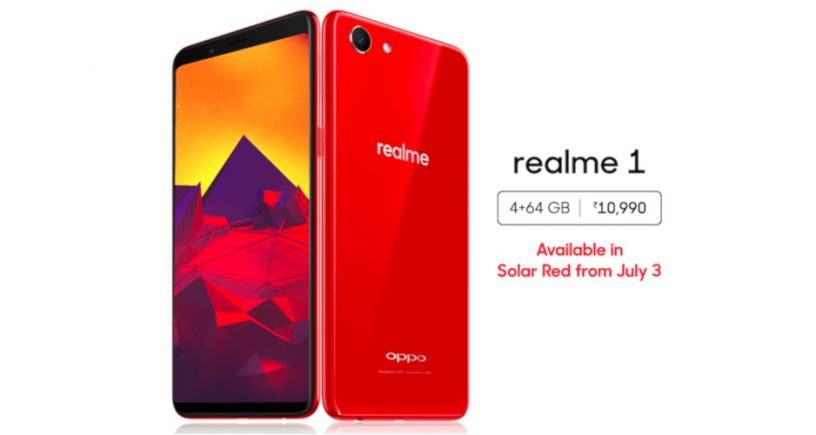 Realme 1 Solar Red colour variant has been launched in India by OPPO and after a great success of the smartphone in the budget smartphone segment in India, the Realme 1 Solar Red version is expected to give the company an even bigger boost in terms of sale. The Oppo-owned brand unveiled the RealMe 1 smartphone in Diamond Black colour in India back in May which was followed by a Silver colour version of the RealMe 1.

On the other hand, the Realme 1 Solar Red colour variant 4GB/6GB of RAM and 64GB/128GB of inbuilt storage. Coming to the highlights of the smartphone, it comes with a 13-megapixel rear camera backed by an LED while at the front, there is an 8-megapixel camera. The Realme 1 also supports face unlock that is rated to unlock the device in 0.1 seconds, however, there is no fingerprint scanner for biometrics.

That being said, the camera software comes with AI stickers, AI beautification mode which is said to learn as well as improve the beautification options based on the user’s preference while the AI real selfie can recognize 296 recognition points which are based on sex, age, skin tone/condition and skin color in order to precisely get your face information.

Talking about the design, the Realme 1 Solar Red colour variant features a glossy back panel as well as a symmetrical design which in turn makes the smartphone look like a diamond while each angle reflects different black colors. Other highlights include dedicated dual SIM as well as microSD card slots along with dual VoLTE support which lets users use 4G and VoLTE on both the SIMs while also giving them an option to switch between them easily.

There is also a 3410mAh battery which uses artificial intelligence-backed (AI) battery management system which is said to learn your usage patterns and habits over the time and then snoozes or closes inactive apps in order to save power. On the other hand, it promises almost 15 hours of battery life with moderate usage.

The RealMe 1 Solar Red version comes with a 6-inch Full HD+ IPS (2160 x 1080 pixels) display which is backed by 18:9 aspect ratio , 1.98mm slim bezels on the sides as well as 84.8 per cent screen-to-body ratio. The smartphone is powered by an octa-core MediaTek Helio P60 processor which is based on 12nm platform and is clocked at 2GHz. While the chipset is paired with ARM Mali-G72 MP3 GPU, GB/6GB of RAM and 64GB/128GB of inbuilt storage, which is expandable up to 256GB through a dedicated microSD card slot.

For optics, there is a 13-megapixel rear camera which is backed by an LED flash, AI scene detection as well as f/2.2 aperture, while there is an 8-megapixel camera at the front with f/2.2 aperture, AI beautification modes, Vivid Bokeh, facial recognition and AR stickers.