Xiaomi is known to announce a couple of flagship killers every year which give high-end offerings from Samsung, LG and Apple, a rum for their money and the year 2018 is going to be no exception.

While the Mi 7 is scheduled to see the light of the day later this year, the Xiaomi Mi Mix 2S has been officially scheduled for a launch on 27th March in a Xiaomi-only event which is expected to be organized in China.

Xiaomi’s spokesperson Donovan Sung has already announced the launch date via Twitter and has touted that the Mi MIX 2S will be powered by the top-of-the-line Snapdragon 845 SoC under the hood which perfectly goes with earlier rumors stating that the Xiaomi Mi Mix 2S could become the first smartphone to come with SD 845 chipset.

While the introduction of Samsung Galaxy S9 is the only hurdle in Xiaomi’s way of launching the first device with Snapdragon 845 chipset, but since the S9-flagship is expected to be launched with Exynos 9 Series 9810 chipset globally, Xiaomi Mi Mix 2S might still be able to bank on the exclusivity in the Asian markets.

On the other hand, while announcing the launch date of Mi Mix 2S, Donovan Sung also revealed an exceptional AnTuTu score of 273,741 for the handset, which brings the smartphone at par with its expensive counterparts, as far as performance credentials are concerned.

That said, such an AnTuTu score can only be achieved with at least 6GB of RAM which brings us to a recent leak which the Mi Mix 2S has been subjected to.

While the leak highlights nothing new about the Xiaomi Mi Mix 2S, it confirms all the earlier rumors about the mid-budget smartphone, which are said to make it the perfect flagship killer of the year. 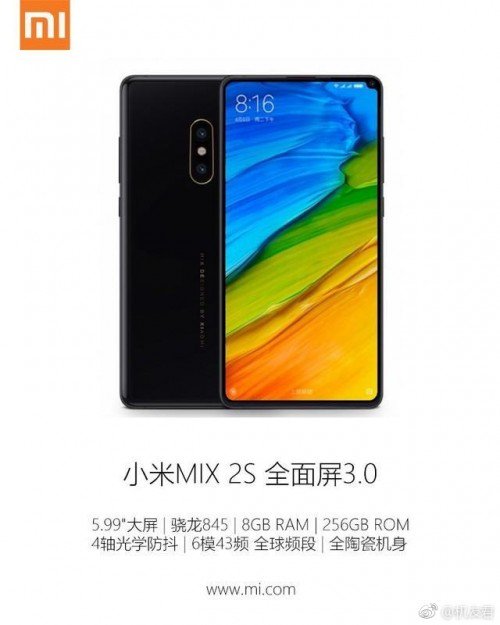 Xiaomi Mi Mix 2S Specifications (According to the recent leak)

The Xiaomi Mi Mix 2s will come with a 6.01-inch (2160 x 1080) IPS LCD display coupled with a corner notch. The biggest difference in the Mi Mix 2S from the Mi Mix 2 will be the placement of the front camera as the latter didn’t have a notch, however, the front-facing sensor was unusually placed on the bottom right corner of the device. In case of the Xiaomi Mi Mix 2S, the camera is on the top right corner, which seems to be an ideal place for the sensor.

Under the hood, it is powered by the Qualcomm Snapdragon 845 processor coupled with 8GB RAM and 256GB of internal storage. While we don’t expect a dedicated micro SD card slot and a 3.5 mm headphone jack, Xiaomi Mi Mix 2S is expected to come with a dual camera setup at the rear and a 16 MP front sensor.

The smartphone will also come with Android 8 Oreo OS out of the box with a custom MIUI skin on top. The leak suggests that the whole package will be backed by a 4400 mAh battery which will possibly support Quick charge 4.0 technology.