HTC Desire 12 Specifications Leaked, To Compete In An Entry-Level Offering

HTC isn’t in a good spot right now as far as its smartphone business is concerned and there is also an uncertainty over how long can the company survive after witnessing back-to-back failures in the flagship and mid-budget segment.

However, in what could be considered as the Taiwanese handset maker’s last fight, the company was rumored to launch a new smartphone in the Desire series which has been making a lot of noise in the market space, these days.

Dubbed as the HTC Desire 12, this is going to be the company’s next big bet in the entry-level smartphone segment which has been ruled by Chinese smartphone makers Xiaomi and Lenovo.

That said, the existence of HTC Desire 12 has been confirmed as a retail box of the subjected device has been leaked which has given us a great insight over how HTC is planning to turn the tables in its favor.

Android Authority has somehow managed to get their hands on the retail box of the HTC Desire 12 and according to their report, the entry-level smartphone is going to come with a 5.5-inch HD+ (720×1440) display, a quad-core MediaTek SoC under the hood and 3GB of RAM which makes up for a great performance package in the segment.

Further, the retail box lists microSD card support (up to 2TB) but it is still unclear whether there will be a dedicated slot for expandable storage or HTC Desire 12 with comes with Hybrid Dual SIM support. The whole package will be supported by a 2730mAh battery having no support for fast charging. 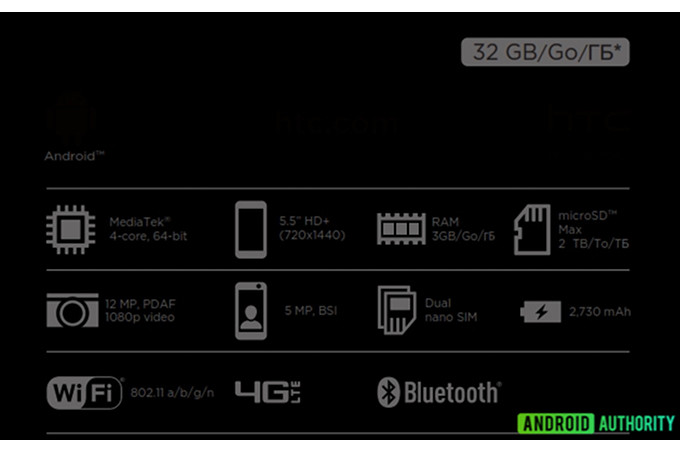 Earlier, renowned tipster Evan Blass had revealed the existence of HTC Desire 12 by leaking its specifications. The initial specifications included Android Oreo out of the box, 2GB RAM, 13MP rear camera sensor, 8MP front camera sensor, and 16GB onboard storage. Evan Blass also reported that the smartphone is codenamed as “Breeze”, although it will be launched as the HTC Desire 12.

With the specs-sheet already being revealed, it’s a matter of time before we’ll have a render of the actual device itself and after that, we expect the pricing and a release date for HTC Desire 12 to be unveiled.

Everything said and done, the entry-level segment is one of the most growing segments in the smartphone business as more and more people are upgrading to the world of smartphones. With HTC Desire 12, on the other hand, the company might be looking to add a substantial number to the sales figures in order to survive in the market.