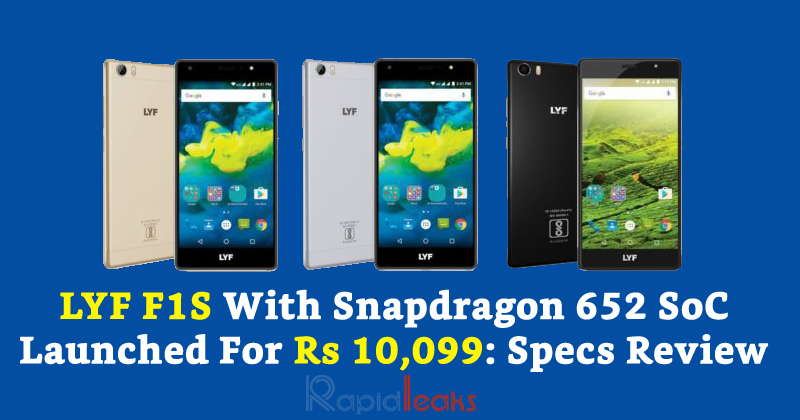 Reliance Retail has added another knight to its F1 series smartphone lineup, dubbed as LYF F1S. The latest entrant is a trimmed down and more economical version of the well received LYF F1S Plus smartphone. It sails on Android version 6.0 Marshmallow which is somewhat tiring to us but the Snapdragon 652 SoC processor under the hood, compensated the error. F1S has been launched bearing a price tag of Rs 10,099 with a Jio Money cashback of Rs 500 which takes the price to Rs 9,599.

Reliance Industries introduced the LYF series to complement Jio’s telecommunication revolution and the company has seen its share of success in the industry. The company initially launched smartphones under four subcategories i.e. Earth, Water, Wind, and Flame which catered the needs having a dependable 4G smartphone at an economical price and became an instant hit.

LYF gained the required experience and came with a targeted F1 series and boy, they ticked all the right boxes. F1S is bound to greatness because of the path laid down by its predecessor F1S Plus. The latter became the only smartphone in sub 15,000 category to offer a separate microSD card and it was a blow of fresh air to many. Reliance knows what Indian users need and the company has never failed to deliver.

Coming back to LYF F1S, here are the specifications that this smartphone boats.

The 5.2-inch (1920 x 1080 pixels) Full HD IPS 2.5D curved glass display will give sharp visuals and minimal sunlight reflection. The 16MP rear camera sits in top right corner of the smartphone and it has a sensor that allows multiple focus. The camera does justice to all the irregularity as was seen in the F1 Plus and considering the sub Rs 10,000 price bracket, this is one of the best cameras you can get in a smartphone. Selfie duties will be performed with a 5MP front shooter which is a bit disappointing from the expected 8MP camera.

Modification modes like Night, Panorama, HDR, electronic image stabilization and white balance makes it a knight for low light photography. However, the shutter speed is not up to the standards.

This is where the LYF F1S actually shines. The octa core Snapdragon 652 processor with Adreno 510 GPU is clocked at 1.8GHz + 1.4GHz and the 3GB RAM makes it ‘the fastest’ smartphone in this price bracket period.

32 GB of Internal Storage with an expandable option up to 128GB through microSD card will provide a drooling performance in every department. Playing games like Asphalt 8 and Mortal Kombat is going to a smooth experience and the 3GB of RAM will ensure multitasking to become an easy task.

The built in video player allows streaming of two videos and an additional SmartPlay feature automatically pauses the video when not looked at directly. (How Thoughtful!!)
There is also a Smart Tray feature that allows users to access 15 apps while taking a call or during an IM conversation.

While the 3000 mAh battery with fast charging is more than enough for a Rs 10,000 smartphone, there are some unbeatable smartphones that gloat about a 4000 mAh battery. However, Reliance Retail claims the battery to deliver 11.5 hours of 4G talk time.

You can use only one 4G SIM at a time while the other will have to do with 2G and there is no separate microSD slot as the smartphone uses hybrid slot for secondary SIM and expandable memory, which is a shame as FIS Plus touted a separate slot.

Fingerprint scanner has now become a standard feature in budget smartphone category but Reliance’s LYF lineup hasn’t come with this feature in any of its smartphone in this category. However, they may justify the deficiency by praising the Snapdragon 652 processor under the hood.

Why the budget smartphone manufacturers are not launching their products with Android Nougat is a question that has been irritating me for a long time now and Reliance Retail may have played it safe by not challenging its competitors in this department. But Why To Copy If One Can Pass With Flying Colours?

With Rs 10,099 price tag and drooling specifications LYF F1S is worth more than what we need to spend as it is also backed by a 2-Year warranty, My Jio cash back and easy EMIs.

However, it now competes in a segment that the likes of Redmi 3S Prime and Lenovo K6 Power rule and if raw performance is your need, LYF F1S is, hands down, the best option for you with a sturdy look and Reliance Jio support.