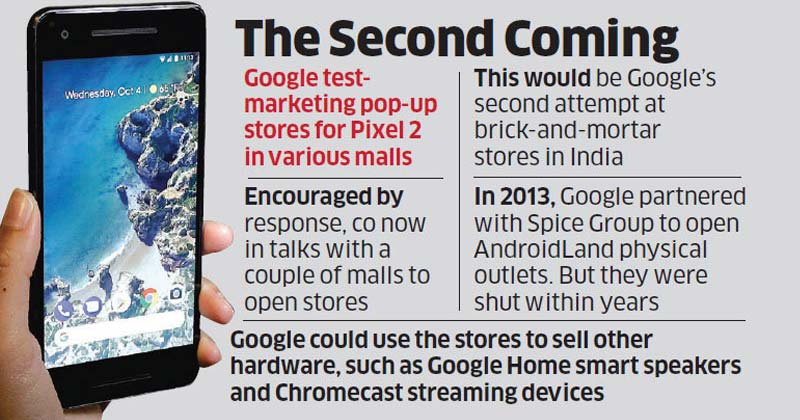 It is not merely a conglomerate rather still, several decades after its commencement, among the world’s most coveted employers. It is not merely a search engine, rather a way of life today regardless of who the user is and where he or she might be located in the world. Google has quite literally changed the way an entire world searches for, uses and consumes information.

But audiences here in India are curious as to what might be the reason behind Google opening brick and mortar stores in the country. Well, it ain’t no rocket science. There’s a simple business reason behind the new proposed move by the search engine giant.

In order to shore up sales of Google’s Pixel smartphones, the latest high-tech offer in the burgeoning smartphone industry, the American multinational is planning to be present in India to perhaps counter the charge of major competition that includes the likes of Apple and Samsung.

Apparently, the tech-giant is currently lagging behind its competition in one of the world’s fastest growing market for smartphones and one where one brand after another has made it quite a habit of enticing hundreds and thousands of consumers with smartphones and evolved gadgets of quite a high pedigree.

But still, one reckons the decision to open pop up stores in India sounds a tad bit sudden if not entirely irrational. Google, it is believed, has been quite encouraged by the response that it’s more than a dozen pop-up stores have fetched across India’s malls including those in Delhi and Mumbai. The same have been used to showcase Google’s Pixel 2 phones to the users for direct access with a sophisticated and state of the art product.

Thus far, at least two prominent malls have shared information that they have received requests for space to set up Google stores. In considering the fact that Google is not only trailing Apple and Samsung but also Chinese smartphones majors like Vivo, Xiaomi and Oppo- it is hardly a surprise that Google wants to rack up its India operations. However, it is unclear whether the firm will apply for a single-brand retailing licence in India or take up the franchise route much like its competitors. For that, maybe early 2018 will offer an answer.