There’s always a bright moment when someone simply reads out the brand name- Apple. Isn’t it?

But “Apple iPhone XS” is a simple arrangement of three words in a singular phrase that has catapulted to the attention of an entire world. And truth be told- it’s not that hard to understand why?

If there were anything tangible like a funnel of creativity then, probably Apple would rightly own the trademark or patent to it. It was sad and indicative of a kind of pandemic when the iconic Steve Jobs departed. One wondered what might become of the brand?

Today, even as Steve Jobs is missed dearly and shall, for the times to come, one cannot undermine the brand being led magnanimously by Tim Cook, the current CEO.

Under Mr Tim Cook’s able guidance, the new iPhone XS has been announced. This has, therefore, heightened the expectations of what to expect from a new design, hitherto-less seen so far from the stable of one of the most admired and fascinating brands of all time.

Here’s what you ought to know regarding Apple iPhone XS:

Not only has the iPhone XS been launched but there’s also the Apple iPhone XS Max that’s out there to further fascinate an already besotted audience further. For starters, these aren’t just any smartphones; they are the tangible embodiment of novelty in the segment of premium smartphones.

In a star-studded Cupertino-based launch at California, Tim Cook led the audiences to embrace the celebrated Apple iPhone X, clearly a much-anticipated product amid a stunned audience.

The Apple iPhone XS Max is a premium upgrade on the current smartphone XS with a 6.5-inch screen in a newer version that’s unmistakably pleasing to the eye and very ravishing as a product.

Meanwhile, the Apple iPhone XS sports a 5.5-inch screen with a robust body and a bold look that may surely appeal to both the millennials as well as those in a mature age group. Powered by the new A12 chip and sporting the famous face-lock feature, this is AI at its very best, truth be told. In addition, the next version of an already very established, premium segment Apple watch has also been announced.

This sleek albeit coveted watch is loaded with a series of handy features that are unmistakably a tribute to Apple’s magnanimous reach for constant innovation. Not only can the watch measure your heart-rate, it can also issue a warning as to when might a ‘fall’ take place from the user’s hand. Can you believe that?

That said, there also happens to be an obvious variance in the pricing where the Apple iPhone XS and iPhone XS Max are concerned. With the iPhone XS being priced at $999, the cost of iPhone XS Max is pegged around $1099. 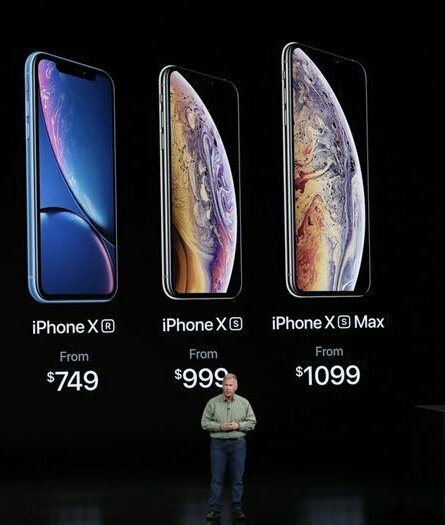 So, have you got your wallets and cash arranged already? In the recent history of the brand, this is the next biggest shake-up since the 2017 events that saw the birth of the iPhone X, iPhone 8, and iPhone 8 Plus.

Fundamentally, the usage of ‘X’, it is believed, is catered to a new brand philosophy of sorts that takes into consideration the zenith that the brand is capable of achieving, not restricted to conventional confines.

In lines with such massive innovation that’s been avidly rendered to the state of the art products, it may not be wrong to ultimately get convinced by the precious words echoed by Mr Cook right a the launch: “With these new launches, we’ve furthered Apple’s reach for creativity and innovation.”

While a lot about the event is still to be fully-disclosed, here’s what popular British media outlet The Telegraph reported:

The iPhone giant is expected to reveal a trio of new handsets. It has just revealed a new Apple Watch Series 4, with upgraded healthcare features and heart rate sensors.

(this article will be updated soon upon further updates)