Facebook Is Developing A Mind Reading Device And If That Is True You Can Bid Goodbye To Privacy!

Mark Zuckerberg is exceedingly ambitious and we know that already but this new revelation about his multi-purpose social media platform, Facebook is scaring the hell out of us. According to a report published in Daily Mail, Zuckerberg’s Facebook may be able to read your darkest and deepest thoughts in the future and we just can’t stop thinking about all the negative aspects.

In April 2016, the world got to know that Facebook has its own version of Area 51, a secret division called ‘Building 8‘. This wing is dedicated to creating ground-breaking products at the intersection of hardware, software, and content. Till then it was okay but these new job adverts shook our mind as it suggest that this division is supposedly working in the mind-reading technology.

There were two ads which were posted on Facebook’s job site. One advert is a ‘brain-computer interface engineer’ to work on a ‘2-year B8 project focused on developing advanced BCI technologies’ and second advert is for a ‘neural imaging engineer‘ who will be responsible for ‘a project focused on developing novel non-invasive neuroimaging technologies’.

The requirement for the candidate’s abilities was limited but the key ability was ‘machine learning methods, including encoding and decoding models, to neuroimaging and electrophysiological data’. Both the vacancies are based at the Menlo Park site in California.

Mark Zuckerberg has always been enthusiast about creating a telepathy system, and he calls it the ‘ultimate communication technology.’

Previously he made a remark stating that he believes that he will be able to create such device that will allow to send full rich thoughts to each other directly. He said, ‘You’ll just be able to think of something and your friends will immediately be able to experience it too, if you’d like. This would be the ultimate communication technology.’

Knowing that he aims to create the mind reading technology, these adverts clearly point that Building 8 might be working on monitoring how brain activity changes when looking at pictures or videos. 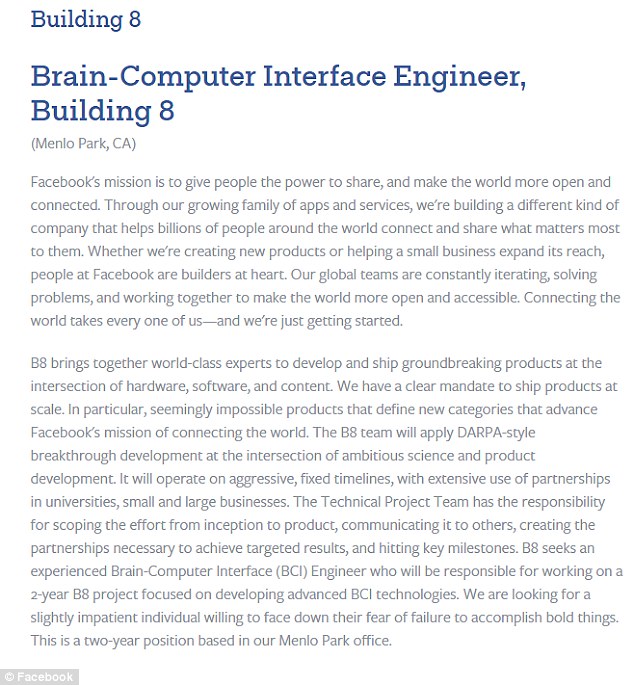 We are not sure but if this is true, it is going to change our lives and demolish the privacy factor once for all and having no personal space will be as scary as ‘one’s furious wife’.