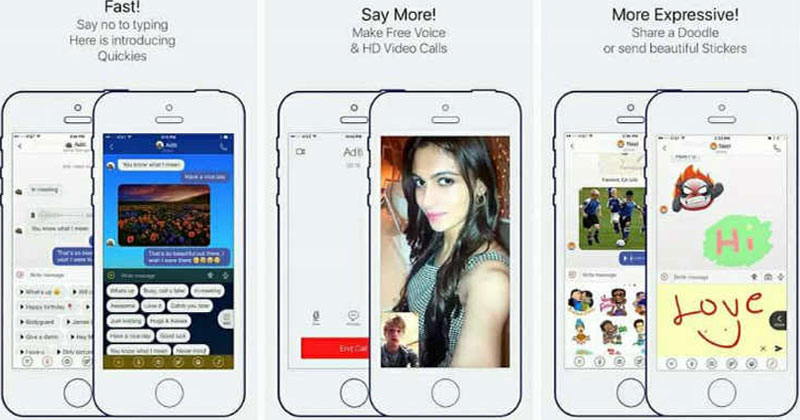 WhatsApp CEO has time and again mentioned how big of a market they have in India, which is pretty apparent regarding the numbers. Almost everyone in the country is using WhatsApp to communicate to their friends, families and colleagues, on daily basis. And, this is not just limited to Android users, but even to Apple users who use WhatsApp more than Apple’s very own iMessage.

Over the course of these socially charged times, more than an ample amount of messaging apps have been introduced in the market and while some get the initial hype, almost all of them have seen the slow death in the past. Even today, WhatsApp does not have a strong and popular rival in the Indian market, but not anymore.

Baba Ramdev’s Patanjali has now launched a more ‘swadeshi’ rival to WhatsApp and it’s called ‘Kimbho’. The tagline of this messaging app is, ‘Ab Bharat Bolega.’

Patanjali’s spokesperson SK Tijarawala tweeted from his handle confirming the launch of the Kimbho messaging app. “Now Bharat will speak. After launching sim cards, Baba Ramdev has launched a new messaging application called Kimbho. Now WhatsApp will be given a competition. Our own #SwadeshiMessagingplatform. Download it directly from Google Play store,” he tweeted.

The launch of this Kimbho app comes just days after the Patanjali and BSNL coalition news. This particular news of coalition between the two resulted in some major news rooting when people started talking about Patanjali sim cards and how the Ayurveda brand is now planning to the telecom sector.

But then Patanjali came forward and clarified that this sim and telecom operation will only be available for the employees of BSNL and no other. However, the Kimbho messaging app is available to the public and can be downloaded from both Google Play Store and Apple’s App Store. On Play Store, the developer is listed as Patanjali Ayurved, but on iOS the developer is Appdios.Inc. However, both apps have the same features and UI and design.

Kimbho has very similar features to that of WhatsApp, and through this, the users can send messages individually to their friend or can even create a group. The app also allows users to broadcast messages to multiple users simultaneously. One can follow his or her favourite celebrities and doodle as well, so this is similar to Instagram or Snapchat. It also appears to support Video calling. Other features include voice calls in addition to sharing multimedia, stickers and more.

All in all, Patanjali has tried to make a one-stop destination for all the current social media apps in the market. Here are few reactions to the news and some have even started using the app.

Downloaded Baba Ramdev’s app. The only other idiot there was @pranavsapra . Here’s our Kimbho KeDarshan. pic.twitter.com/KyaSBDYtFF

There will come a day when Babaji & Co. will make Nuclear Weapons ?#kimbhoApphttps://t.co/mHqtwUVjLZ

I hope #KIMBHO will not ask me link my adhar card ?

So the "Swadeshi" messaging app of #Patanjali, the #Kimbho, puts "AT&T" as the carrier name… Seriously?! pic.twitter.com/jWgcfnZpLM

I am in love with the app icon.. hats off to the designer. Very creative. ? #Kimbho

While everyone has their own views about it, there’s a man who has already found faults in the app and how it lacks heavily in terms of security. French cybersecurity expert Elliot Alderson posted a short video on Twitter claiming how he could access users’ messages without much trouble. He asked people to not install the app.

Hi @KimbhoApp before trying to compete #WhatsApp, you can try to secure your app. It's possible to choose a security code between 0001 and 9999 and send it to the number of your choice #kimbhoApp pic.twitter.com/YQqK8lfIeI

This @KimbhoApp is a joke, next time before making press statements, hire competent developers… If it is not clear, for the moment don't install this app. #Kimbho #KimbhoApp pic.twitter.com/wLWzO6lhSR

Ok, I will stop here. The #Kimbho #android #app is a security disaster. I can access the messages of all the users…?‍♂️

Then, upon further research, Alderson returned and claimed how the user interface of Kimbho was a copy of another application, in each and every way.

The @KimbhoApp is a copy paste of another #application. The description and the screenshots in the app stores are the same. Moreover, the #Kimbho app is making request to bolomessenger[.]com pic.twitter.com/gOKOhash5X

It is build on an app called "BOLO". Kimbho team is so dumb that they didnt even changed the OTP SMS format!! Even the description n pics used are same as Bolo app! ? https://t.co/QKGjYC1y2J pic.twitter.com/40yRxZKbLX

If all that has been alleged by Elliot Anderson is true, then the security check of the app should be promptly addressed, before more and more people become a victim of some massive security breach.

What are your views on the app and the allegation it has been facing, in just a single day of its launch?