Today sees the publication of the fourth annual Digital News Report from the Reuters Institute for the Study of Journalism.

The research uses data collected from over 20,0000 people in 12 countries; providing a comprehensive cross-country picture of how news consumption is continuing to evolve in markets as diverse as the US, UK, Germany, Japan and Brazil.

Here at TheMediaBriefing we’ve been fortunate to see an advance copy of the full report, enabling us to identify a number of key developments in the new study.

The 2015 report arguably doesn’t reveal any particularly new developments, but it does firmly reinforce many of the major trends – such as the growing influence of smartphones, the role of social media and the rise of video consumption – that we have seen in recent years.

We’ll be doing deeper dives into topics such as sponsored content and willingness to pay in the near future; but in the meantime, here’s our take on the most important insights in the 112 page study.

Average weekly usage has grown from 37% to 46%, and mobile devices may well overtake desktop in 2016 as the most important device for online news consumption. The strongest growth in this field is seen amongst the 18-24 age group.

Tablet usage of news in most markets is slowing (although not yet declining), whilst the desktop is identified as the most important device for online consumption by just 57% of respondents, down from 65% last year.

2. Most smartphone users only consume one online news source

Nearly half of respondents admit to only accessing online news from just a single news outlet. This conclusion has potentially huge repercussions for smaller brands and news start-ups. 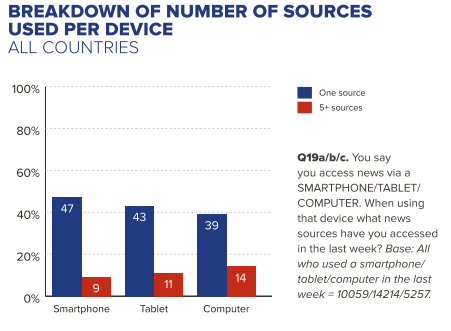 Over half of the news audience in major media markets such as the UK, USA, Germany and Australia use either one news app, or none at all.

In the UK 51% of respondents use the BBC news app, but this market-leading dominance isn’t seen to the same extent in other markets.

Amongst German digital news consumers, 15% use Spiegel’s app; in the US, the Fox News app leads the way with 14%. And in a clear indication of how different US news markets can be, 1 in 10 use a dedicated local TV news app. 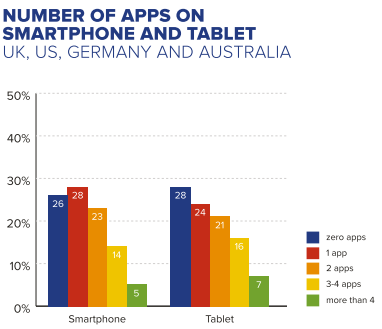 These findings mean that there is inevitably a long tail for news publishers, with many providers to reach a wide online audience, via both apps and browsers. Given this conclusion, smaller players are no doubt asking themselves if apps – especially when their production costs and long production cycles are taken into consideration – are worth their while.

3. Low app usage may, in part, be due to the increasing popularity of social media as a discovery mechanism for news.

Social continues to grow as a channel for news discovery, with the most dramatic growth observed by the Reuters Institute in the past year being seen in France (+15), Brazil (+14), UK (+13) and the USA (+10).

The only country reporting a drop in this behaviour was Italy (-2) although this decline is small.

The upward trend of social as a source for news over the past four years is pretty discernible, reflecting the rationale for continued – and increased – investment in this space by many media players. 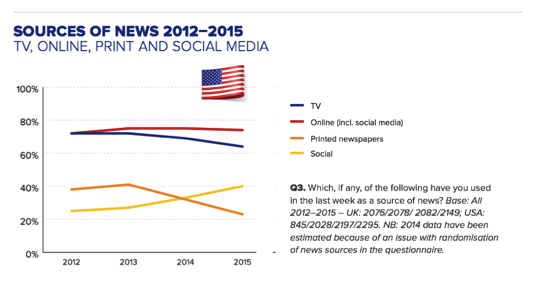 Within the growing social space, Facebook is easily the most popular social network for news consumption, enjoying more than twice the audience of its nearest rival, YouTube.

Twitter’s popularity amongst the mediarati isn’t reflected in usage patterns amongst the general population; only 11% of whom report using the service for news.

However, this top-level finding risks overlooking the different ways in which users harness these networks. As the report notes, “we seek news on Twitter, but bump into it on Facebook.” 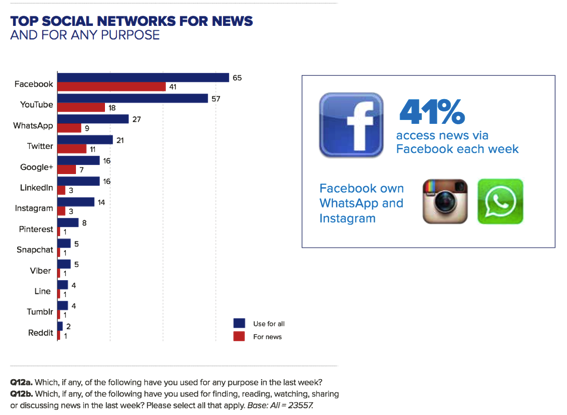 5. But it’s not all about social. Other online channels are also important to news consumers
Although TV is still the main source of news in 8/12 countries, that’s not true in the US, Denmark, Australia and Finland.

Online channels are also the most frequented channel to access news in two-thirds of the countries covered in this study: Spain, Italy, Ireland, Denmark, Finland, USA, Brazil and Australia.

This means that whilst people are still watching TV and view it as valuable, it is often used less than online sources. What’s also notable is that the reach of online news services is considerably larger than social channels alone, reflecting the fact that news consumers use a variety channels to shape their digital news experience.

6. Audiences are interested in news. But the number of people willing to pay for it online remains quite small, with regular paying subscribers the audience to target.

Amongst online news users – as opposed to the entire population – in the countries studied, fewer than one in five pay for online news.

Payment is highest in Finland (14%) and Denmark (13%) and lowest in the UK (6%) and Ireland (7%), demonstrating the uphill struggle that most publishers face as they move to paywall or micropayment models.

Average spend in this arena is also, arguably, quite low; although different markets are at different phases of paid-for maturity.

In some of these paid-for markets, paying audiences are quite “sticky.” Over two-thirds of paying online news subscribers in the UK, USA and Australia has on-going payments set up.

Retaining this audience, and minimising churn, should therefore be a key strategic goal for online news providers.

7. Subscriptions and micropayments matter, not least due to the prevalence of ad-blocking

We’ve written about this a few times recently on TheMediaBriefing. And with good reason.

The Reuters Institute’s research found that 47% of their US sample and 39% in the UK stated that they regularly use ad-blocking software.

It is against this backdrop that media players may be further incentivised to explore the potential benefits afforded by native advertising. Nonetheless, as this year’s report suggests, this may not be the panacea that publishers hope it will be.

We’ll have a special extended feature on this aspect of the study tomorrow.

8. Video news consumption is on the rise

Alongside increased consumption of news consumption via smartphones and the on-going importance of social media for news discovery, the report also identifies a significant increase in the consumption of online news video.

This development is most notable in Spain (+10), Denmark (+8), UK (+5), Italy (+5), and Japan (+5); reflecting an increase in video content within social networks as well as greater prominence and attention given to video by many news publishers.

However, not everyone is tapping into this trend. Of those who don’t use video, four in ten (40%) say they find reading text more convenient, almost a third (29%) are put off by pre-roll ads, and a fifth (21%) express a preference for watching video content on bigger screens.

Nonetheless, despite the resurgence in podcasting, video still comfortably triumphs audio as the multimedia content of choice in all markets.

Finally, the Reuters Institute report shows how a number of digital-born brands are rivalling traditional players in domestic markets and sometimes beating them internationally.

Buzzfeed, they note, has doubled its market share in the US in the past twelve months (5% to 10%), whilst The Huffington Post (at 22% weekly reach), beats both the New York Times and CNN in it’s home market.

Internationally, HuffPo beats the BBC and MSN, although the resilience of Yahoo! in many markets is worth noting. As is the niche audience enjoyed by some digital operators like Vice. 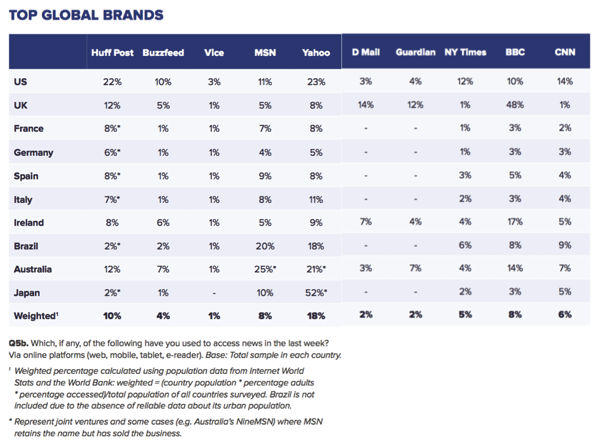