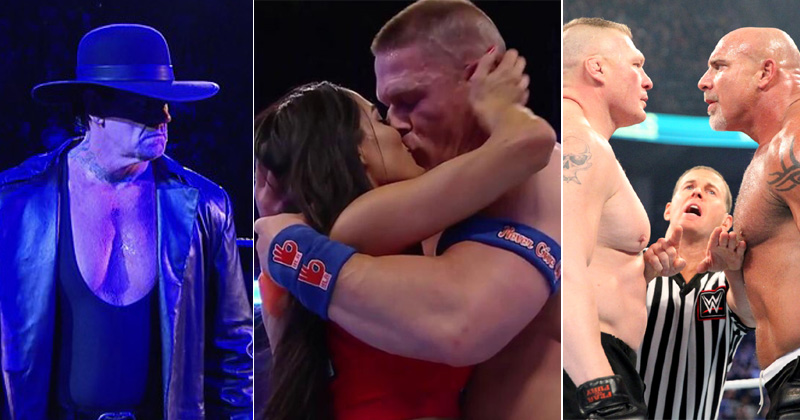 Wrestlemania 33 would be an unforgettable night for many years to come, and one can just not stop thanking WWE for the gold that they provided to all the Wrestlemania fans. The nights also lived up to its name – showcase of the immortals.

Along with some epic fights, Wrestlemania 33 also had some of the most iconic moments. John Cena proposed to his girlfriend Nikki Bella after the duo won their Mixed Tag against The Miz & Maryse. This was the first time that the real-life couple came teamed up in the ring and by the end of the match, the duo has now teamed up for life. This exact moment would be Cena and Bella’s Wrestlemania moment for life.

One can just not skip this cute love moment in the ring, even if they’re a fan of Wrestlemania or not. The couple shed some tears and also had a heart warming moment after getting off the ring.

Apart from this lovely moment on the most lively ring, one exit entered the Wrestlemania history which would break every 90s kid’s, heart. The *Great* Undertaker took an exit from Wrestlemania after being a part of it for the last 25 years.

Nothing and I mean nothing, can top the sorrow of every Undertaker fan when ‘The Deadman” waved a goodbye to Wrestlemania at the age of 52.

His arrival was as magnificent as his exit, and his retirement truly feels like an end of an era. Even though The Undertaker lost to Roman Reigns in his last match, he exited like The Undertaker would and left his iconic black hat, coat and gloves in the centre of the ring.

Even twitter couldn’t handle the retirement and went into a frenzy over his exit. Check out some of the most amazing tweets to The Undertaker’s retirement.

More than 30 minutes after the end of #WrestleMania 33, Undertaker's iconic trench coat and hat remain in the ring.
Photo: Steve Argintaru pic.twitter.com/OEHkYQ2QTp

It's official, Undertaker is retiring. Tonight is the last time we'll see him wrestle. #Wrestlemania pic.twitter.com/ACbZQ84if3

I read this many years ago…

Another match at Wrestlemania 33 that everyone was looking forward to was Universal Championship which was going to take place between Brock Lesnar and Goldberg. Everyone was amazed to see a match that lasted more than 2 minutes. The match that actually lasted 4 minutes and 46 seconds is said to be one of the most spectacular matches at Wrestlemania 33. Lesnar won against Goldberg, even though both the parties used just two moves against each other.

One of the highlights from their match were Goldberg’s spear of Lesnar through the barricade and Lesnar’s casual yet beastly leapfrog counter.

All of this and much more made Wrestlemania 33 a historic event for their fans as well as for the fellow wrestlers in the ring.

Stay Indoors In Indore! Why This Makes Sense Mr. Einstein?