India’s pro boxing sensation Vijender Singh and China’s Zulpikar Maimaitiali are set to face each other at “Battleground Asia” in Mumbai on Saturday. The Beijing Olympics bronze medallist has been training with his trainer Lee Beard in Manchester, England for this bout.

For all the flesh and blood we see inside the ring, promoting a professional boxing bout is all about show business and India’s most famous pro boxer, Vijender Singh, knows it very well.

Also Read: Vijender Singh vs Zulpikar Maimaitiali: The Battle Ground For The King Of Asia

After saying that Chinese products don’t last long and same will be the case with Zulpikar Maimaitiali, now given the hostile phase of an uneasy relationship between neighbours countries India and China with tensions rising over border issues, Vijender Singh, the World Boxing Organisation (WBO) Asia-Pacific champion has given another statement saying that he feels responsible for the nation and the situation will be in his mind during the bout against Zulpikar Maimaitiali.

Vijender Singh, during a conversation with Sportskeeda, said, “I will say that there is responsibility. It is India-China and the situation is bad right now, so I feel a kind of responsibility (towards the country)”, and added that it would not only be on his mind but on the minds of the entire Indian population, as well.

He also said that people will be coming to witness the fight of the ages, which will decide the Asian Lion, from the U.K and the U.S.A as an Indian has been given a chance to set things right against a familiar nemesis.

Vijender Singh vs Zulpikar Maimaitiali, is a bout that took months in making and when these two fighters will trade punches on August 5, it is going to be one hell of a clash to witness at the National Sports Club of India, Mumbai.

While India’s Vijender Singh will be entering with unbeaten streak which began when he turned pro in 2015, winning all the eight bouts, Zulpikar Maimaitiali too stands strong with his own unbeaten streak, having played nine bouts.

It is going to be a winner takes all bout as Vijender’s WBO Asia-Pacific title and Zulpikar’s WBO Oriental Super Middleweight title will be on the line. 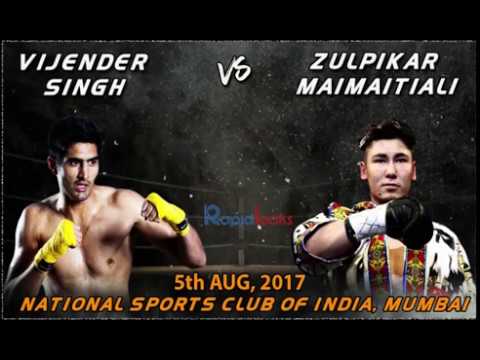 Vijender Singh and Zulpikar Maimaitiali have been engaged in a war of words since “Battleground Asia” was announced and this has heated up the anticipation as well as excitement ahead of Saturday’s contest.

India has always been emotional as well patriotic audience and given the current border standoff, Vijender Singh winning the bout will definitely provide a boost to their confidence and all hopes will be riding on the Olympic bronze medalist.

P.S One Can Easily Compare The Hype To An India vs Pakistan Cricket Match.