Home Sports India Gets 2nd Gold In CWG 2018, All Thanks To Sanjita Chanu

Day 1 of Commonwealth Games 2018 was rather eventful for India with a silver and gold medal in men’s and women’s weightlifting category, respectively, in their pocket. All thanks to Gururaj and Mirabai Chanu.

Following their success in the games, Sanjita Chanu became the third Indian to bag a medal at the CWG 2018 and the second one to win a gold.

Sanjita Chanu, a 24-year-old weightlifter hailing from Manipur, won a gold medal in women’s 53 kg weightlifting final. However, this is not Sanjita’s first medal in the Commonwealth. She had won the gold in Glasgow 2014 but that was in the 48 kg category. She has since upgraded to the 53 kg category but the result was no different.

Along with the gold medal, she even broke the Commonwealth Games record in the Snatch category by clean lifting 84 kg, which was more than 3kg of what her nearest rival was able to lift. The record that she managed to break with her winning lift was earlier set by her compatriot Swarti Singh, four years ago at the Glasgow Commonwealth Games in 2014.

As for the gold this year, Sanjita’s lift was 10 kg more than the silver medal holder, Papua Guinea’s Loa Dika Toua. The third position went to Canada’s Rachel Leblanc-Bazinet.

Here’s how the netizens congratulated Sanjita Chanu on her gold win and praised her hard work in the games.

India's second gold medal of #CWG18 has come from one of the favourites, Sanjita Chanu, who finishes with a combined effort of 192. Superb. #weightlifting

another day, another Chanu, another record, another gold.#SanjitaChanu #CWG2018

Thank you #SanjitaChanu for making India ??proud by winning Gold ?in #CWG2018 ! A repeat of the Glasgow performance! ??
Wish you more & more laurels in future ! #GC2018Weightlifting pic.twitter.com/IX3afiMynf

Congratulation ???to our Golden girl #SanjitaChanu winning??? gold medal for India .
She wins the medal by lifting a total of 192 kg . pic.twitter.com/BFqeTBCywy

Wonderful start to the day. Heartiest Congratulations to #SanjitaChanu on India's second Gold at the #CWG2018 and her second gold in successive CWG after the one in Glasgow. Top effort and consistency. pic.twitter.com/qFkMOs6z2F

India’s golden girls are back in action #SanjitaChanu today ?? Congrats!!

Congratulations #SanjitaChanu for bagging gold in weightlifting at the #CommonwealthGames2018. We are proud of you. #CitizenMukherjee

Bhartiya Naari Sab par Bhaari. One more Gold. Congratulations #SanjitaChanu for winning our second gold in #GC2018Weightlifting in the women's 53kg category. #CWG2018
Her second CWG gold after the 48kg one in Glasgow. Proud of you champion. pic.twitter.com/Xnms7T6Byz

So many more days to come and medals to win. Go India, Go!! 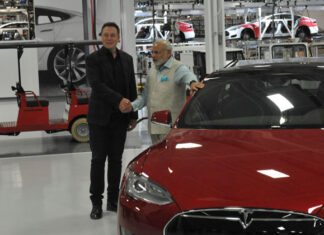 Dev Tyagi -
It might not be the most dominant discussion in the annals of the automobile industry at the moment, but nevertheless, it is...