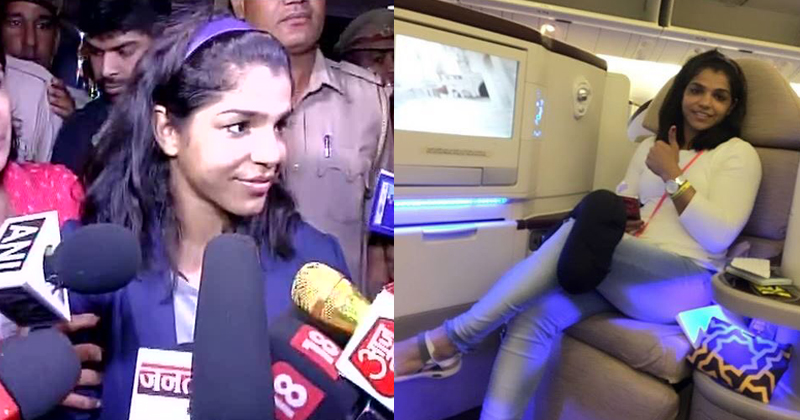 Sakshi Malik who opened the account of medals for India in Rio Olympics 2016, finally returned to India and the crowd at the airport greeted her with a grand welcome.

Sakshi grabbed a Bronze in the Women’s Wrestling competition at the Rio Olympics for India and  became the first Indian female to win Bronze. Her arrival was a much-celebrated affair and as soon as she touched down at Indira Gandhi International Airport, New Delhi, at 4 in the morning on Wednesday, she was greeted amidst a lot of fanfare.

Check Out The Celebrations At Her Arrival:

People at Delhi airport to welcome #SakshiMalik , she is expected to arrive shortly from #Rio pic.twitter.com/OUcobYF9cz

WATCH: Olympic bronze medalist #SakshiMalik speaks upon her arrival in Delhi from #Riohttps://t.co/CDmaLMvdUS

Was my biggest dream to win a medal for India at #Olympics,was preparing for this for last 12 years: #SakshiMalik pic.twitter.com/9Gaort3sPr

Its a great feeling, the reception I got was amazing, proud moment: #SakshiMalik pic.twitter.com/Gfy25sGS30

Want to thank everyone for their support, hope to continue to receive such support in future as well: #SakshiMalik pic.twitter.com/x9B2wIiXDP

The bronze medalist will be travelling in a decked up vehicle throughout her hometown to meet the various members of her family before entering at her home.

She was rewarded with an amount of ₹ 2.5 crores at a felicitation event held in her hometown in Rohtak district in Haryana. The Chief Minister of Haryana, Manohar Lal Khattar was also present at the felicitation event to honour Sakshi.