Home Sports Virat Kohli Leaves Lionel Messi Behind In The List Of Most Valuable... 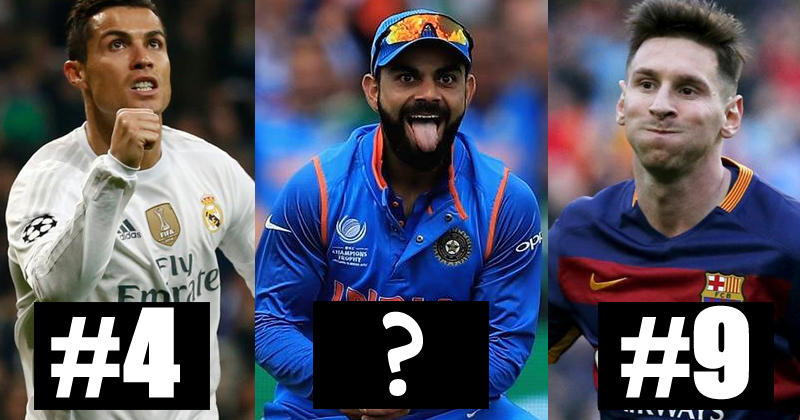 Indian skipper Virat Kohli has been on a milestone since taking the reigns from MS Dhoni and while he is arguably the best cricketer in the world, a recent Forbes report has also made him the most marketable athlete from the sport as well as the 7th best on the list of global athletes.

For the unknown, Forbes has been the pre-eminent bi-weekly magazine providing its readers with the information related to the crème de la crème, their earnings, net worth and market value, every year.

However, brand value being one of the prime parameters to unravel the greatness as well as fan following of an athlete, Forbes has announced its annual list of sportspersons having the biggest brand value. According to the list of most valuable Athletes, which takes into consideration the earnings (excluding salary as well as the bonus from the particular sport and all investment income), minus average income of top 10 athletes in the same sport, Virat Kohli has pipped the likes of Lionel Messi and NBA star Steph Curry.

Interestingly, while Virat Kohli was already the Highest paid cricket on the world, the comparison between the duos of AB de Villiers-Virat Kohli and Cristiano Ronaldo-Lionel Messi, two of the most sought-after athletes from Cricket and football, is long withstanding. As the two sports also happen to be two of the most followed sports in the world, enjoying the largest viewership, Virat Kohli beating Lionel Messi in the list of most valuable players in the world, might draw even more comparison between the athletes from the two action-laden as well as entertaining sports.

However, for Lionel Messi’s fans, we would like to mention that the salary package of footballers are way more than that of any other sport and since the average income of top 10 players from the respective sport was deducted from these athletes’ earnings, Messi slipped to the 9th spot.

As for the Lionel Messi vs Cristiano Ronaldo debate, the Portuguese has literally taken over the reigns from his arch rival after lifting the La Liga and Champions League trophies, as well as becoming the FIFA Player Of The Year.

Coming back to the Indian Cricketing great and current captain Virat Kohli, he is fast becoming the next milestone man after Sachin Tendulkar as he recently scored his 31st ODI century, leaving Ricky Ponting (30) behind in the list of cricketer with most number of centuries, only Tendulkar having a better tally of 49 centuries.

And after the India vs New Zealand 2017, 2nd ODI, the Indian skipper became the leading run-scorer of 2017, leaving behind in-form South African batsmen, Hashim Amla.

No wonder, the 29-year-old finds himself on this list.