Although the game turned out to be a lame one but the result has affected the league tally adversely. Two teams lost their chances of playing in the play offs due to reckoning and another two fixed their birth in the semi-finals.

However, after witnessing highly intensified matches in the last couple of days, this game between Atletico de Kolkata and Kerala Blaster felt dull in comparison. Nevertheless, it served its purpose by delivering the massive home crowd of 12000 people, what they expected.

The home side made a big mistake by concluding a Javi Lara strike as a goal but it turned out to be an outside that they never expected. Kerala Blasters took advantage of the confusion and moments later when Debjit Majumder fumbled Mohammed Rafi’s pass and Hengbart flicked towards an open CK Vineeth. The latter made no mistake and headed the ball straight into the goalpost giving a napping Arnab and his team a strong sucker punch.

CK Vineeth was all over the place and ATK was struggling to keep the player out of their box. However, in the 13th minute, the player became the provider and shot a cross towards Rafi, the latter being at the far post. Debjit again made the mistake of letting his guard down and the crowd came to their feet due to the anticipation of Rafi’s shot. But the goalkeeper managed to tackle Rafi’s attack, much to the crowd’s relief.

The game changed in the next few minutes as Atletico de Kolkata lashed out on Kerala Blasters with an all and all attack. The visitors were stunned by the developments and in the 17th minute, Postiga emerged through a crowded defense and took a shot at glory. The oooh’s from the crowd were proof enough that the shot went wide of the post.

The hosts didn’t back down from the challenge and within a minute, they scored an equalizer.

In the 18th minute, Postiga again came into the spotlight when he received a pass from Iain Hume from inside the box and without wasting any time the Portuguese player flicked the ball towards Pearson, who had successfully beaten his marker. The latter played a composed shot while anticipating the goalkeeper’s defence and made the ball feel the warmth of the nets.

Many half chances were seen in the rest of the first half but neither team was able to take the lead.

The lull carried on in the second half and by this time, it was evident that Atletico de Kolkata are content with taking the game to draw, sealing their semi-final birth and Kerala Blasters were ready to take chances in the next game.

The game ended with a draw with little things happening here and there, but, in the end, the home team gave the crowd what they deserved by qualifying in the playoffs for the third consecutive time.

Meanwhile, Pune City FC and the defending champions, NorthEast United have lost their chances of playing in the semi-finals due to reckoning and this draw also propelled Delhi Dynamos to the play offs.

So, after Mumbai, Delhi and Kolkata, which team will qualify next?
Only time will tell… 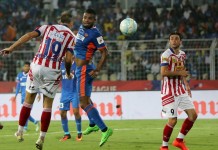